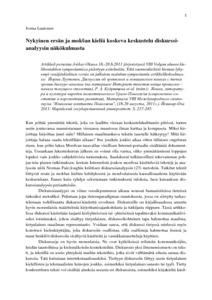 The article contains an analysis of 21 texts in which the current situation of the Mordvin languages and nationalities (Erzya and Moksha) in Russia is discussed. The texts were taken from the Internet and date from the late 1990s to the end of the first decade of the third millennium. The method used in the study is critical discourse analysis (Norman Fairclough). As a result of the analysis, eight different discourses were identified. These discourses reveal different viewpoints on the ongoing changes as well as attempts to influence the current linguistic situation. Further, these discourses reflect different ways of conceiving the national and linguistic reality.