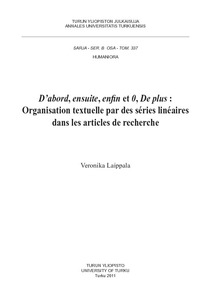 The study examines the signalling of text organisation in research articles (RA) in French. The work concentrates on a particular type of organisation provided by text sequences, i.e. structures organising text to items of which at least some are signalled by markers of addition or order: First… 0… The third point… In addition… / Premièrement… 0… Le troisième point… De plus… By indicating the way the text is organised, these structures guide the reader in the reading process so that he doesn’t need to interpret the text structure himself.

The aim of the work is to study factors affecting the marking of text sequences. Why is their structure sometimes signalled explicitly by markers such as secondly, whereas in other places such markers are not used? The corpus is manually XML-annotated and consists of 90 RAs (~800 000 words) in French from the fields of linguistics, education and history.

Second, the marking of text sequences seems to depend on the length of the text. The longer the text segment, the more vague the marking. Additive markers and unmarked items are more frequent in longer sequences possibly covering several pages, whereas shorter sequences are often signalled explicitly by exact markers. Also the marker types vary according to the sequence length. Anaphoric expressions, such as first, are fairly close to their referents and are used in short sequences, connectors, such as secondly, are frequently used in sequences of intermediate length, whereas the longest sequences are often signalled by constructions composed of an ordinal and a noun acting as a subject of the sentence: The first item is…

Finally, the marking of text organisation depends also on the discipline the RA belongs to. In linguistics, the marking is fairly frequent and precise; exact markers such as second are the most used, and structures with unmarked items are less common. Similarly, the marking is fairly frequent in education. In this field, however, it is also less precise than in linguistics, with frequent unmarked items and additive markers. History, on the other hand, is characterised by less frequent marking. In addition, when used, the marking in this field is also less precise and less explicit.