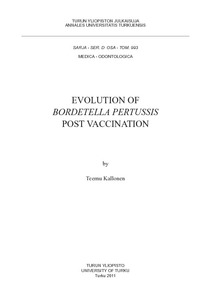 Whooping cough or pertussis is caused by the gram-negative bacterium Bordetella pertussis. It is a highly contiguous disease in the human respiratory tract. Characteristic of pertussis is a paroxysmal cough with whooping sound during gasps of breath after coughing episodes. It is potentially fatal to unvaccinated infants. The best approach to fight pertussis is to vaccinate. Vaccinations against pertussis have been available from the 1940s. Traditionally vaccines were whole-cell pertussis (wP) preparations as part of the combined diphtheria-tetanus-pertussis (DTP) vaccines. More recently acellular pertussis (aP) vaccines have replaced the wP vaccines in many countries. The aP vaccines are less reactogenic and can also be administered to school children and adults. There are several publications reporting variation in the i>B. pertussis virulence factors that are also aP vaccine antigens. This has occurred in the genes coding for pertussis toxin and pertactin about 15 to 30 years after the introduction of pertussis vaccines to immunisation programs. Resurgence of pertussis has also been reported in many countries with high vaccination coverage. In this study the evolution of B. pertussis was investigated in Finland, the United Kingdom, Poland, Serbia, China, Senegal and Kenya. These represent countries with a long history of high vaccination coverage with stable vaccines or changes in the vaccine formulation; countries which established high vaccination coverage late; and countries where vaccinations against pertussis were started late. With bacterial cytotoxicity and cytokine measurements, comparative genomic hybridisation, pulsed-field gel electrophoresis (PFGE), genotyping and serotyping it was found that changes in the vaccine composition can postpone the emergence of antigenic variants. It seems that the change in PFGE profiles and the loss of genetic material in the genome of B. pertussis are similar in most countries and the vaccine-induced immunity is selecting non-vaccine type strains. However, the differences in the formulation of the vaccines, the vaccination programs and in the coverage of pertussis vaccination have affected the speed and timing of these changes.