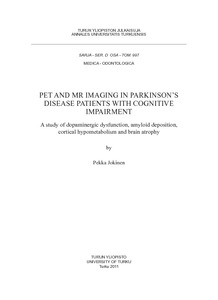 Parkinson’s disease (PD) is the second most common neurodegenerative disorder. It is characterized by a severe loss of substantia nigra dopaminergic neurons leading to dopamine depletion in the striatum. PD affects movement, producing motor symptoms such as rigidity, tremor and bradykinesia. Non-motor symptoms include autonomic dysfunction, neurobehavioral problems and cognitive impairment, which may lead to dementia. The pathophysiological basis of cognitive impairment and dementia in PD is unclear.

The aim of this thesis was to study the pathophysiological basis of cognitive impairment and dementia in PD. We evaluated the relation between frontostriatal dopaminergic dysfunction and the cognitive symptoms in PD patients with [18F]Fdopa PET. We also combined [