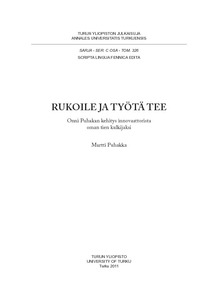 Pray and work. The development of Onni Puhakka: from innovator to nonconformist

This ethnological biographical study examines the modernization which began in the mid-1800s, continued into the mid-1900s, and has changed Finnish society in many ways. This era has been studied on a general level quite extensively, but this work explores the life and everyday experiences of Onni Puhakka (1870−1955), a farmer who spent most of his life in the town of Liperi. The goal is to find new perspectives on the development of the modernization process in society through the experiences of an individual. In this study, a central theme is the rural co-operative movement represented in Finland by Pellervo as well as its development in this country and as a significant undertaking in Onni Puhakka’s life. The co-operative movement was one of the most significant sectors affecting modernization in rural communities. The main character in the study is the grandfather of the present author, and thus this research belongs to the newly accepted ethnological research tradition of studying one’s own community.

Written documents, mainly collected and preserved by Onni Puhakka himself during his lifetime, form the research material. The material consists mainly of Puhakka’s extensive correspondence, personal notes and diaries, documents related to his farm, and photographs taken by him. Earlier research and other written material examining the general development of the period were used to provide a background for the study.

This assessment of the co-operative movement made by Onni Puhakka and his predictions about its development were not unfounded. This has been shown by several studies examining the development of both the Pellervo and working class cooperative movements. The professionalization of management, managerialism, as well as the direct links between professional managers of local co-operatives and central organizations have lead to the situation in which fewer and fewer people make the decisions, and management has as its goal economic success and growth. Co-operative enterprises that have grown in size have become estranged from the everyday life of their members. Instead of taking care of relations with the membership of the co-op, competitive ability and the market share have become the most important concerns of the management. As the membership has become alienated, their interest in large-scale co-ops has also become largely economic.

This study confirms the observations of the latest research on modernization which states that modernization has not been a straightforward and inevitable development that has lead to the present situation. For example, the criticism directed by Puhakka toward the co-operative movement includes information that shows that a few others who were initially actively involved also criticized the development of the movement. Despite his occasional frustration, Onni Puhakka continued his criticism and attempts to get the co-operative movement to change its course and return to its ‘roots’. In the early years of the cooperative movement he probably did not differ much from the other pioneers in the sense that many of them had adopted and internalized the same values and motive for being involved that he had. However, Puhakka differed from his colleagues in the sense that he was able to believe in what he called the “fundamental values” of the co-operative movement longer than many of them.