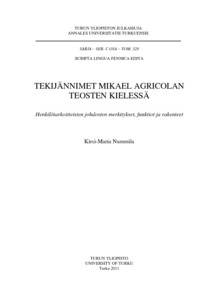 Agent nouns play an important role both in the vocabulary of natural language and in broader sentence structures, since in a text it is constantly necessary to refer to actors re-ferring to persons in the text. As a concept and a phenomenon, the agent noun is widely known in languages. It is a word formed with a certain derivational affixes, which typical-ly refers to a person. In my research the agent noun category includes both deverbal and denominal derivatives referring to persons, e.g. kirjoittaa > kirjoittaja (to write > writer), asua > asuva (to inhabit > inhabitant), imeä > imeväinen (to suck > suckling), juopua > juopunut (to drink > drunkard), pelätä > pelkuri (to fear > one who fears ‘a coward’), apu > apulainen (help/to help > helper); lammas > lampuri (sheep > shepherd). Besides original Finnish expressions, agent noun derivatives taken as such from foreign languages form a word group of central importance for the research (e.g. nikkari, porvari, ryöväri, based on the German/Swedish for carpenter, burgher, robber). Especially important for the formation of agent nouns in Finnish are the models offered by foreign languages.

The starting point for my work is predominantly semantic, as both the criteria for collecting the material and the categorisation underlying the analysis of the material are based on semantic criteria. When examining derivatives, aspects relating to structure are also inevitably of central importance, as form and meaning are closely associated with each other in this type of vocabulary. The alliance of structure and meaning can be described in an illustrative manner with the help of structural schemata. The examination of agent nouns comprises on the one hand analysis of syntactic elements and on the other, study of cultural words in their most typical form. The latter aspect offers a research object in which language and the extralinguistic world, referents, their designations and cultural-historical reality are in concrete terms one and the same.

Thus both the agent noun types that follow the word formation principles of the Finn-ish language and those of foreign origin borrowed as a whole into Finnish illustrate very well how an expression of a certain origin and formed according to a certain structural model is inseparably bound up with the background of its referent and in general with semantic factors. This becomes evident both on the level of the connection between cer-tain linguistic features and text genre and in relation to cultural words referring to per-sons. For example, the model for the designations of God based on agent nouns goes back thousands of years and is still closely linked in 16th century literature with certain text genres. This brings out the link between the linguistic feature and the genre in a very con-crete manner. A good example of the connection between language and the extralinguistic world is provided by the cultural vocabulary referring to persons. Originally Finnish agent noun derivatives are associated with an agrarian society, while the vocabulary relat-ing to mediaeval urbanisation, the Hansa trade and specialisation by trade or profession is borrowed and originates in its entirety from vocabulary that was originally German.