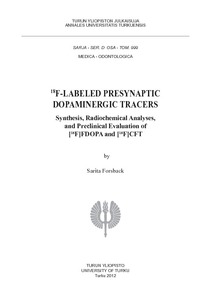 Dysfunction of the dopaminergic system in brain is involved in several pathological conditions such as Parkinson’s disease and depression. 2β-Carbomethoxy-3β-(4-[18F] fluorophenyl)tropane ([18F]CFT) and 6-[18F]fluoro-L-dopa ([18F]FDOPA) are tracers for imaging the dopaminergic function with positron emission tomography (PET). Peripheral uptake of [18F]FDOPA is also used in the localization and diagnosis of neuroendocrine tumors.

[18F]FDOPA and [18F]CFT can be synthesized by electrophilic fluorodestannylation. However, the specific radioactivity (SA) in the electrophilic fluorination is low with traditional synthetic methods. In this study, [18F]FDOPA and [18F]CFT were synthesized using post-target-produced [18F]F2 as an electrophilic fluorination agent. With this method, tracers are produced with sufficient SA for neuroreceptor studies. Specific aims in this study were to replace Freon-11 in the production of [18F]FDOPA due to the ozone depleting properties of this solvent, to determine pharmacological specificity and selectivity of [18F]CFT with respect to monoamine transporters, and to compare the ability of these tracers to reflect the degree of nigral neuronal loss in rats in which the dopaminergic system in the brain had been unilaterally destroyed by 6- OHDA.

Post-target-produced [18F]F2 was successfully used in the production of [18F]FDOPA and [18F]CFT. The SA achieved was substantially higher than in previous synthetic methods. Deuterated compounds, CD2Cl2, CDCl3 and C3D6O, were found to be suitable solvents for replacing Freon-11. Both [18F]FDOPA and [18F]CFT demonstrated nigrostriatal dopaminergic hypofunction and correlated with the number of nigral dopaminergic neurons in the 6-OHDA lesioned rat. However, the dopamine transporter (DAT) tracer [18F]CFT was more sensitive than the dopamine synthesis tracer [18F]FDOPA in detecting these defects because of the higher non-specific uptake of [18F]FDOPA. [18F]CFT can also be used for imaging the norepinephrine transporter (NET) because of the specific uptake into the locus coeruleus. The observation that [18F]CFT exhibits specific uptake in the pancreas warrants further studies in humans with respect to potential utility in pancreatic imaging