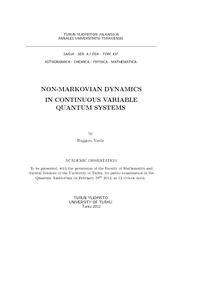 The present manuscript represents the completion of a research path carried forward during my doctoral studies in the University of Turku. It contains information regarding my scientific contribution to the field of open quantum systems, accomplished in collaboration with other scientists.

The main subject investigated in the thesis is the non-Markovian dynamics of open quantum systems with focus on continuous variable quantum channels, e.g. quantum Brownian motion models. Non-Markovianity is here interpreted as a manifestation of the existence of a flow of information exchanged by the system and environment during the dynamical evolution. While in Markovian systems the flow is unidirectional, i.e. from the system to the environment, in non-Markovian systems there are time windows in which the flow is reversed and the quantum state of the system may regain coherence and correlations previously lost.

Signatures of a non-Markovian behavior have been studied in connection with the dynamics of quantum correlations like entanglement or quantum discord. Moreover, in the attempt to recognisee non-Markovianity as a resource for quantum technologies, it is proposed, for the first time, to consider its effects in practical quantum key distribution protocols. It has been proven that security of coherent state protocols can be enhanced using non-Markovian properties of the transmission channels.

The thesis is divided in two parts: in the first part I introduce the reader to the world of continuous variable open quantum systems and non-Markovian dynamics. The second part instead consists of a collection of five publications inherent to the topic.