Mental Well-being at Work. A Sign of a Healthy Organisation and a Necessary Precondition for Organisational Development

Mental Well-being at Work. A Sign of a Healthy Organisation and a Necessary Precondition for Organisational Development 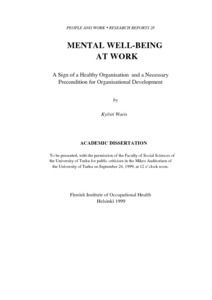 The methods were used for finding out the preconditions for organisational development based on self-improvement and clarifying the impacts of working environment (organisational functioning and job characteristics) on a worker’s mental state and health. The influences were examined on a general level - regardless of individual personal or specific contextual factors. One aim was also to clarify how cognitions and emotions are intertwined and how they influence a person’s perception of the working environment.

The data consisted of 15 blue-collar organisations in the public sector. The organisations were divided in target and comparison groups depending on the research frames. The data was collected by questionnaires by post. The exploratory and confirmatory factor analyses (Lisrel) were used as the main statistical methods in examining the structures of the methods and impacts between the variables.

It was shown that it is possible for organisations to develop their working conditions themselves on specific preconditions. The advance of the development processes could be shown by the amount of the development activity as well as by the changes of the mental well-being (ability to act) and sick absenteeism of the personnel.

It was found that the JDS and the EZ methods were reliable and valid measures in the Finnish data. It was shown that, in addition to the objective working environment (organisational functioning and job characteristics), also such a personal factor as selfesteem influences a person’s perception of mental work load. However, the influence did not seem to be direct. The importance of job satisfaction as a general indicator of perceived working conditions was emphasised. Emotional and cognitive factors were found to be functionally intertwined constituting a common factor. Organisational functioning and the characteristics of work had connections with a person’s health measured by sick absenteeism.