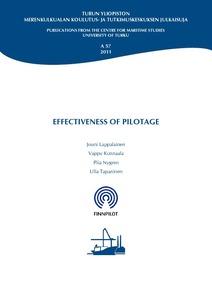 The objective of the pilotage effectiveness study was to come up with a process descrip-tion of the pilotage procedure, to design performance indicators based on this process description, to be used by Finnpilot, and to work out a preliminary plan for the imple-mentation of the indicators within the Finnpilot organisation.
The theoretical aspects of pilotage as well as the guidelines and standards used were determined through a literature review. Based on the literature review, a process flow model with the following phases was created: the planning of pilotage, the start of pilo-tage, the act of pilotage, the end of pilotage and the closing of pilotage.
The model based on the literature review was tested through interviews and observation of pilotage. At the same time an e-mail survey directed at foreign pilotage organisations, which included a questionnaire concerning their standards and management systems, operations procedures, measurement tools and their attitude to the passage planning, was conducted. The main issues in the observations and interviews were the passage plan and the bridge team co-operation. The phases of the pilotage process model emerged in both the pilotage activities and the interviews whereas bridge team co-operation was relatively marginal. Most of the pilotage organisations, who responded to the query, also use some standard-based management system. All organisations who answered the survey use some sort of a pilotage process model. According to the query, the main measuring tools for pilotage are statistical information concerning pilotage and the organisations, the customer feedback surveys, and financial results. Attitudes to-wards passage planning were mostly positive among the organisations.
A workshop with pilotage experts was arranged where the process model constructed on the basis of the literature review was tuned to match practical pilotage. In the workshop it was determined that certain phases and the corresponding tasks, through which pilo-tage can be described as a process, were identifiable in all pilotage. The result of the workshop was a complemented process model, which separates incoming and outgoing traffic, as well as the fairway pilotage and harbour pilotage from each other. Addition-ally indicators divided according to the data gathering method were defined. Data con-cerning safety and traffic flow is gathered in the form of customer feedback. The pilot's own perceptions of the pilotage process are gathered through self-assessment. The measurement data which is connected to the phases of the pilotage process is generated e.g. by gathering statistics of the success of the pilot dispatches, the accuracy of the pi-lotage and the incidents that occurred during the pilotage, near misses, deviations and accidents. The measurement data is collected via the PilotWeb at the closing of the pilo-tage.
A separate project and a project group with pilots also participating will be established for the deployment of the performance indicators. The phases of the project are: the definition phase, the implementation phase and the deployment phase. The purpose of the definition phase is to prepare questions for ship commanders concerning the cus-tomer feedback questionnaire and also to work out the self-assessment queries and the queries concerning the process indicators.