Observations on the Pharmacokinetics and Pharmacodynamics of Dexmedetomidine. Clinical Studies on Healthy Volunteers and Intensive Care Patients 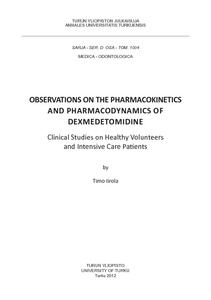 Patients treated in intensive care units require sedation and analgesia. However,
sedative drugs also have potential adverse effects, and there is no single ideal sedativeanalgesic
drug for these patients.

Dexmedetomidine is an apha2-adrenoceptor agonist licenced for sedation of intensive care
patients and patients undergoing surgery and other invasive procedures. Several routes
of parenteral administration (intravenous, intramuscular, subcutaneous and intranasal)
have been utilized.

Intranasally administered dexmedetomidine was efficacious and well tolerated, making
it appropriate for clinical situations requiring light sedation. The clinical significance of
the gastrointestinal inhibitory effects of dexmedetomidine should be further evaluated
in intensive care patients. The possibility of potentially altered potency and effect
duration should be taken into account when administering dexmedetomidine to elderly
or hypoalbuminaemic patients.