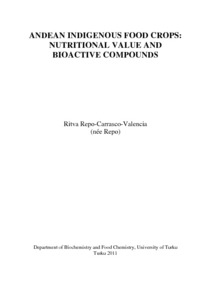 The Andean area of South America is a very important center for the domestication of food crops. This area is the botanical origin of potato, peanut and tomato. Less well- known crops, such as quinoa (Chenopodium quinoa), kañiwa (Chenopodium pallidicaule) and kiwicha (Amaranthus caudatus), were also domesticated by ancient Andean farmers. These crops have a long history of safe use with the local populations and they have contributed to the nutrition and wellbeing of the people for centuries. Several studies have reported the nutritional value of Andean grains. They contain proteins with a balanced essential amino acid composition that are of high biological value, good quality oil and essential minerals, for example iron, calcium and zinc. They are potential sources of bioactive compounds such as polyphenols and dietary fiber. The main objective of the practical work was to assess the nutritional value of Andean native grains with a special emphasis on the bioactive components and the impact of processing. The compounds studied were phenolic acids, flavonoids, betalains and dietary fiber. The radical scavenging activity was measured as well. Iron, calcium and zinc content and their bioavailability were analyzed as well. The grains were processed by extrusion with the aim to study the effect of processing on the chemical composition.

Quinoa, kañiwa and kiwicha are very good sources of dietary fiber, especially of insoluble dietary fiber. The phenolic acid content in Andean crops was low compared with common cereals like wheat and rye, but was similar to levels found in oat, barley, corn and rice. The flavonoid content of quinoa and kañiwa was exceptionally high. Kiwicha did not contain quantifiable amounts of these compounds. Only one variety of kiwicha contained low amounts of betalains. These compounds were not detected in kañiwa or quinoa. Quinoa, kañiwa and kiwicha are good sources of minerals. Their calcium, zinc and iron content are higher than the content of these minerals in common cereals. In general, roasting did not affect significantly mineral bioavailability. On the contrary, in cooked grains, there was an increase in bioavailability of zinc and, in the case of kañiwa, also in iron and calcium bioavailability.

In all cases, the contents of total and insoluble dietary fiber decreased during the extrusion process. At the same time, the content of soluble dietary fiber increased. The content of total phenolics, phytic acid and the antioxidant activity decreased in kiwicha varieties during the extrusion process. In the case of quinoa, the content of total phenolic compounds and the radical scavenging activity increased during the extrusion process in all varieties. Taken together, the studies presented here demonstrate that the Andean indigenous crops have excellent potential as sources of minerals, flavonoids and dietary fiber. Further studies should be conducted to characterize the phenolic compound and antioxidant composition in processed grains and end products. Quinoa, kañiwa and kiwicha grains are consumed widely in Andean countries but they also have a significant, worldwide potential as a new cultivated crop species and as an imported commodity from South America. Their inclusion in the diet has the potential to improve the intake of minerals and health-promoting bioactive compounds. They may also be interesting raw materials for special dietary foods and functional foods offering natural sources of specific health-promoting components.