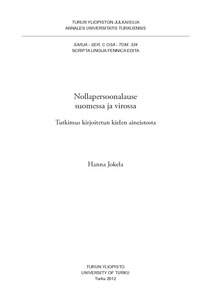 The present study focuses on the zero person constructions both in Finnish and Estonian. In the zero person construction, there is no overt subject and the verb is in the 3rd person singular form: Fin. Tammikuussa voi hiihtää Etelä-Suomessakin. Est. Jaanuaris saab suusatada ka Lõuna-Soomes ‘In January one can ski even in South-Finland’. The meaning of the zero construction is usually considered generic and open. However, the zero may be interpreted as indexically open so that the reference can be construed from the context. This study demonstrates how the zero may be interpreted as referring to the speaker, the addressee, or anybody.

The approach taken is contrastive. The data comes from magazine articles published in Finnish and translated into Estonian. The data consists of Finnish sentences with the zero person and their Estonian translations. In addition, the data includes literary fiction, and non-translated Estonian corpora texts as well.

Estonian and Finnish are closely related and in principle the personal system of the two languages is almost identical, nevertheless, there are interesting differences. The present study shows that the zero person construction is not as common in Estonian as it is in Finnish. In my data, a typical sentence with the zero person in both languages is a generic statement which tells us what can or cannot be done. When making generic statements the two languages are relatively similar, especially when the zero person is used together with a modal verb.

The modal verbs (eg. Fin. voida ‘can’, saada ‘may’, täytyä ‘must’; Est. võima ‘may’, saama ‘can’, tulema ’must’) are the most common verbs in both Finnish and Estonian zero person constructions. Significant differences appear when a non-modal verb is used. Overall, non-modal verbs are used less frequently in both languages. Verbs with relatively low agentivity or intentionality, such as perception verb nähdä in Finnish and nägema in Estonian, are used in the zero person clauses in both languages to certain extent. Verbs with more agentive and intentional properties are not used in the Estonian zero person clauses; in Finnish their use is restricted to specific context.

The aim of this study was to analyze motivations for choosing the zero person in certain contexts. In Estonian, the use of the zero person constructions is more limited than in Finnish, and some of the constraints are grammatical. On the other hand, some of the constraints are motivated by the differences in actual language use. Contrasting the two languages reveals interesting differences and similarities between these two languages and shows how these languages may use similar means differently.