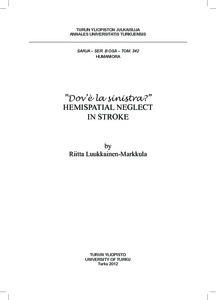 As long as the incidence of stroke continues to grow, patients with large right hemisphere
lesions suffering from hemispatial neglect will require neuropsychological evaluation and rehabilitation. The inability to process information especially that coming from the left
side accompanied by the magnetic orientation to the ipsilesional side represents a real
challenge for rehabilitation. This dissertation is concerned with crucial aspects in the clinical
neuropsychological practice of hemispatial neglect.

In studying the convergence of the visual and behavioural test batteries in the assessment
of neglect, nine of the seventeen patients, who completed both the conventional
subtests of the Behavioural Inattention Test and the Catherine Bergego Scale assessments,
showed a similar severity of neglect and thus good convergence in both tests. However,
patients with neglect and hemianopia had poorer scores in the line bisection test and they
displayed stronger neglect in behaviour than patients with pure neglect.

The second study examined, whether arm activation, modified from the Constraint
Induced Movement Therapy, could be applied as neglect rehabilitation alone without
any visual training. Twelve acute- or subacute patients were randomized into two rehabilitation
groups: arm activation training or traditional voluntary visual scanning training.
Neglect was ameliorated significantly or almost significantly in both training groups due
to rehabilitation with the effect being maintained for at least six months.

In studying the reflections of hemispatial neglect on visual memory, the associations
of severity of neglect and visual memory performances were explored. The
performances of acute and subacute patients with hemispatial neglect were compared with
the performances of matched healthy control subjects. As hypothesized, encoding from
the left side and immediate recall of visual material were significantly compromised in
patients with neglect. Another mechanism of neglect affecting visual memory processes is
observed in delayed visual reproduction. Delayed recall demands that the individual must
make a match helped by a cue or it requires a search for relevant material from long-term
memory storage. In the case of representational neglect, the search may succeed but the
left side of the recollected memory still fails to open.

Visual and auditory evoked potentials were measured in 21 patients with hemispatial
neglect. Stimuli coming from the left or right were processed differently in both
sensory modalities in acute and subacute patients as compared with the chronic patients.
The differences equalized during the course of recovery.

Recovery from hemispatial neglect was strongly associated with early rehabilitation
and with the severity of neglect. Extinction was common in patients with neglect
and it did not ameliorate with the recovery of neglect. The presence of pusher symptom
hampered amelioration of visual neglect in acute and subacute stroke patients, whereas
depression did not have any significant effect in the early phases after the stroke. However,
depression had an unfavourable effect on recovery in the chronic phase.

In conclusion, the combination of neglect and hemianopia may explain part of
the residual behavioural neglect that is no longer evident in visual testing. Further research
is needed in order to determine which specific rehabilitation procedures would be most
beneficial in patients suffering the combination of neglect and hemianopia. Arm activation
should be included in the rehabilitation programs of neglect; this is a useful technique
for patients who need bedside treatment in the acute phase. With respect to the deficit in
visual memory in association with neglect, the possible mechanisms of lateralized deficit
in delayed recall need to be further examined and clarified. Intensive treatment induced
recovery in both severe and moderate visual neglect long after the first two to first three
months after the stroke.