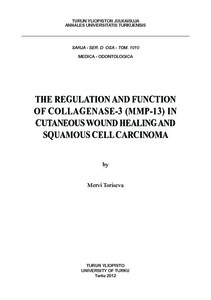 Matrix metalloproteinase-13 (MMP-13) is a potent proteolytic enzyme, whose
expression has been previously associated with fetal bone development and postnatal
bone remodeling and with adult gingival wound healing. MMP-13 is also known to be
involved in the growth and invasion of various cancers including squamous cell
carcinoma (SCC) of the skin. The aim of this study was to further elucidate the
function and regulation of MMP-13 in wound repair and cancer.

In this study, it was shown that fetal skin fibroblasts express MMP-13 in response
to transforming growth factor-β in a p38 MAP kinase dependent manner. In addition,
MMP-13 was found to be expressed in vivo by wound fibroblasts in human fetal skin
grafted on SCID mice. Adenovirally delivered expression of MMP-13 enhanced
collagen matrix contraction by fibroblasts in vitro in association with altered
cytoskeletal structure, enhanced proliferation and survival. These results indicate that
MMP-13 is involved in cell-mediated collagen matrix remodeling and suggest a role
for MMP-13 in superior matrix remodeling and scarless healing of fetal skin wounds.
Using an MMP-13 deficient mouse strain, it was shown that MMP-13 is essential for
the normal development of experimental granulation tissue in mice. MMP-13 was
implicated in the regulation of myofibroblast function and angiogenesis and the
expression of genes involved in cellular proliferation and movement, immune
response, angiogenesis and proteolysis. Finally, epidermal mitogen, keratinocyte
growth factor (KGF) was shown to suppress the malignant properties of skin SCC cells
by downregulating the expression of several target genes with potential cancer
promoting properties, including MMP-13, and by reducing SCC cell invasion.