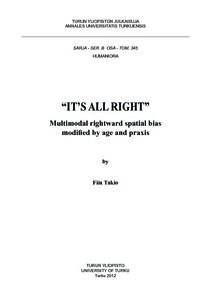 The general goal of the present work was to study whether spatial perceptual asymmetry initially observed in linguistic dichotic listening studies is related to the linguistic nature of the stimuli and/or is modality-specific, as well as to investigate whether the spatial perceptual/attentional asymmetry changes as a function of age and sensory deficit via praxis.

Several dichotic listening studies with linguistic stimuli have shown that the inherent perceptual right ear advantage (REA), which presumably results from the left lateralized linguistic functions (bottom-up processes), can be modified with executive functions (top-down control). Executive functions mature slowly during childhood, are well developed in adulthood, and decline as a function of ageing. In Study I, the purpose was to investigate with a cross-sectional experiment from a lifespan perspective the age-related changes in top-down control of REA for linguistic stimuli in dichotic listening with a forced-attention paradigm (DL). In Study II, the aim was to determine whether the REA is linguistic-stimulus-specific or not, and whether the lifespan changes in perceptual asymmetry observed in dichotic listening would exist also in auditory spatial attention tasks that put load on attentional control. In Study III, using visual spatial attention tasks, mimicking the auditory tasks applied in Study II, it was investigated whether or not the stimulus-non-specific rightward spatial bias found in auditory modality is a multimodal phenomenon. Finally, as it has been suggested that the absence of visual input in blind participants leads to improved auditory spatial perceptual and cognitive skills, the aim in Study IV was to determine, whether blindness modifies the ear advantage in DL. Altogether 180-190 right-handed participants between 5 and 79 years of age were studied in Studies I to III, and in Study IV the performance of 14 blind individuals was compared with that of 129 normally sighted individuals.

The results showed that only rightward spatial bias was observed in tasks with intensive attentional load, independent of the type of stimuli (linguistic vs. non-linguistic) or the modality (auditory vs. visual). This multimodal rightward spatial bias probably results from a complex interaction of asymmetrical perceptual, attentional, and/or motor mechanisms. Most importantly, the strength of the rightward spatial bias changed as a function of age and augmented praxis due to sensory deficit. The efficiency of the performance in spatial attention tasks and the ability to overcome the rightward spatial bias increased during childhood, was at its best in young adulthood, and decreased as a function of ageing. Between the ages of 5 and 11 years probably at first develops movement and impulse control, followed by the gradual development of abilities to inhibit distractions and disengage attention. The errors especially in bilateral stimulus conditions suggest that a mild phenomenon resembling extinction can be observed throughout the lifespan, but especially the ability to distribute attention to multiple targets simultaneously decreases in the course of ageing. Blindness enhances the processing of auditory bilateral linguistic stimuli, the ability to overcome a stimulus-driven laterality effect related to speech sound perception, and the ability to direct attention to an appropriate spatial location. It was concluded that the ability to voluntarily suppress and inhibit the multimodal rightward spatial bias changes as a function of age and praxis due to sensory deficit and probably reflects the developmental level of executive functions.