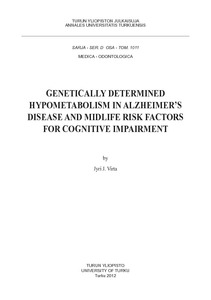 The role of genetic factors in the pathogenesis of Alzheimer’s disease (AD) is not completely
understood. In order to improve this understanding, the cerebral glucose metabolism of seven
monozygotic and nine dizygotic twin pairs discordant for AD was compared to that of 13
unrelated controls using positron emission tomography (PET). Traditional region of interest
analysis revealed no differences between the non-demented dizygotic co-twins and controls. In
contrast, in voxel-level and automated region of interest analyses, the non-demented
monozygotic co-twins displayed a lower metabolic rate in temporal and parietal cortices as well
as in subcortical grey matter structures when compared to controls. Again, no reductions were
seen in the non-demented dizygotic co-twins. The reductions seen in the non-demented
monozygotic co-twins may indicate a higher genetically mediated risk of AD or genetically
mediated hypometabolism possibly rendering them more vulnerable to AD pathogenesis.

With no disease modifying treatment available for AD, prevention of dementia is of the utmost
importance. A total of 2 165 at least 65 years old twins of the Finnish Twin Cohort with
questionnaire data from 1981 participated in a validated telephone interview assessing cognitive
function between 1999 and 2007. Those subjects reporting heavy alcohol drinking in 1981 had
an elevated cognitive impairment risk over 20 years later compared to light drinkers. In addition,
binge drinking was associated with an increased risk even when total alcohol consumption was
controlled for, suggesting that binge drinking is an independent risk factor for cognitive
impairment. When compared to light drinkers, also non-drinkers had an increased risk of
cognitive impairment.