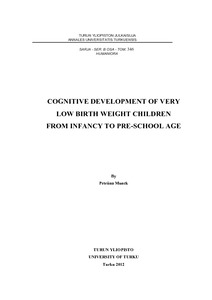 The survival of preterm born infants has increased but the prevalence of long-term morbidities has still remained high. Preterm born children are at an increased risk for various developmental impairments including both severe neurological deficits as well as deficits in cognitive development. According to the literature the developmental outcome perspective differs between countries, centers, and eras. Definitions of preterm infant vary between studies, and the follow-up has been carried out with diverse methods making the comparison less reliable. It is essential to offer parents upto-date information about the outcome of preterm infants born in the same area. A centralized follow-up of children at risk makes it possible to monitor the consequences of changes in the treatment practices of hospitals on developmental outcome.

The main findings of the thesis were that VLBW infants who fussed or cried more in the infancy were not at greater risk for problems in their cognitive development. However, crying was associated with poorer motor development. The developmental outcome of the present population was better that has been reported earlier and this improvement covered also cognitive development. However, the difference to fullterm born peers was still significant. Major brain pathology and intestinal perforation were independent significant risk factors for adverse outcome, also when several individual risk factors were controlled for. Cognitive development at the age of two years was strongly related with development at the age of five years, stressing the importance of the early assessment, and the possibility for early interventions. Finally, VLBW children had poorer pre-reading skills compared with their full-term born peers, but the IQ was an important mediator even when children with mental retardation were excluded from the analysis.

The findings suggest that counseling parents about the developmental perspectives of their preterm infant should be based on data covering the same birth hospital. Neonatal brain imaging data and neonatal morbidity are important predictors for developmental outcome. The findings of the present study stress the importance of both short-term (two years) and long-term (five years) follow-ups for the individual, and for improving the quality of care.