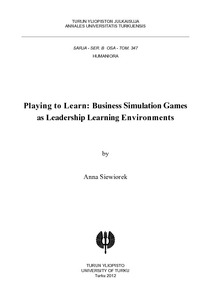 The aim of this dissertation is to investigate if participation in business simulation gaming
sessions can make different leadership styles visible and provide students with experiences
beneficial for the development of leadership skills. Particularly, the focus is to describe the
development of leadership styles when leading virtual teams in computer-­supported
collaborative game settings and to identify the outcomes of using computer simulation games
as leadership training tools.

To answer to the objectives of the study, three empirical experiments were conducted to
explore if participation in business simulation gaming sessions (Study I and II), which
integrate face-­to-­face and virtual communication (Study III and IV), can make different
leadership styles visible and provide students with experiences beneficial for the development
of leadership skills. In the first experiment, a group of multicultural graduate business
students (N=41) participated in gaming sessions with a computerized business simulation
game (Study III). In the second experiment, a group of graduate students (N=9) participated in
the training with a ‘real estate’ computer game (Study I and II). In the third experiment, a
business simulation gaming session was organized for graduate students group (N=26) and the
participants played the simulation game in virtual teams, which were organizationally and
geographically dispersed but connected via technology (Study IV). Each team in all
experiments had three to four students and students were between 22 and 25 years old. The
business computer games used for the empirical experiments presented an enormous number
of complex operations in which a team leader needed to make the final decisions involved in
leading the team to win the game. These gaming environments were interactive;; participants
interacted by solving the given tasks in the game. Thus, strategy and appropriate leadership
were needed to be successful. The training was competition-­based and required
implementation of leadership skills.

The data of these studies consist of observations, participants’ reflective essays written after
the gaming sessions, pre-­ and post-­tests questionnaires and participants’ answers to open-­
ended questions. Participants’ interactions and collaboration were observed when they played
the computer games. The transcripts of notes from observations and students dialogs were
coded in terms of transactional, transformational, heroic and post-­heroic leadership styles. For
the data analysis of the transcribed notes from observations, content analysis and discourse
analysis was implemented. The Multifactor Leadership Questionnaire (MLQ) was also
utilized in the study to measure transformational and transactional leadership styles;; in
addition, quantitative (one-­way repeated measures ANOVA) and qualitative data analyses
have been performed.

The results of this study indicate that in the business simulation gaming environment, certain
leadership characteristics emerged spontaneously. Experiences about leadership varied
between the teams and were dependent on the role individual students had in their team.

These four studies showed that simulation gaming environment has the potential to be used in
higher education to exercise the leadership styles relevant in real-­world work contexts.
Further, the study indicated that given debriefing sessions, the simulation game context has
much potential to benefit learning. The participants who showed interest in leadership roles
were given the opportunity of developing leadership skills in practice.

The study also provides evidence of unpredictable situations that participants can experience
and learn from during the gaming sessions. The study illustrates the complex nature of
experiences from the gaming environments and the need for the team leader and role divisions
during the gaming sessions. It could be concluded that the experience of simulation game
training illustrated the complexity of real life situations and provided participants with the
challenges of virtual leadership experiences and the difficulties of using leadership styles in
practice. As a result, the study offers playing computer simulation games in small teams as
one way to exercise leadership styles in practice.