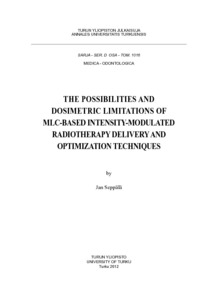 The use of intensity-modulated radiotherapy (IMRT) has increased extensively in
the modern radiotherapy (RT) treatments over the past two decades. Radiation dose
distributions can be delivered with higher conformality with IMRT when compared to
the conventional 3D-conformal radiotherapy (3D-CRT). Higher conformality and target
coverage increases the probability of tumour control and decreases the normal tissue
complications. The primary goal of this work is to improve and evaluate the accuracy,
efficiency and delivery techniques of RT treatments by using IMRT.

This study evaluated the dosimetric limitations and possibilities of IMRT in small
(treatments of head-and-neck, prostate and lung cancer) and large volumes (primitive
neuroectodermal tumours). The dose coverage of target volumes and the sparing of critical
organs were increased with IMRT when compared to 3D-CRT. The developed split field
IMRT technique was found to be safe and accurate method in craniospinal irradiations.
By using IMRT in simultaneous integrated boosting of biologically defined target
volumes of localized prostate cancer high doses were achievable with only small increase
in the treatment complexity. Biological plan optimization increased the probability of
uncomplicated control on average by 28% when compared to standard IMRT delivery.

Unfortunately IMRT carries also some drawbacks. In IMRT the beam modulation is
realized by splitting a large radiation field to small apertures. The smaller the beam
apertures are the larger the rebuild-up and rebuild-down effects are at the tissue
interfaces. The limitations to use IMRT with small apertures in the treatments of
small lung tumours were investigated with dosimetric film measurements. The results
confirmed that the peripheral doses of the small lung tumours were decreased as the
effective field size was decreased. The studied calculation algorithms were not able to
model the dose deficiency of the tumours accurately. The use of small sliding window
apertures of 2 mm and 4 mm decreased the tumour peripheral dose by 6% when
compared to 3D-CRT treatment plan.

A direct aperture based optimization (DABO) technique was examined as a solution
to decrease the treatment complexity. The DABO IMRT technique was able to achieve
treatment plans equivalent with the conventional IMRT fluence based optimization
techniques in the concave head-and-neck target volumes. With DABO the effective
field sizes were increased and the number of MUs was reduced with a factor of two.
The optimality of a treatment plan and the therapeutic ratio can be further enhanced by
using dose painting based on regional radiosensitivities imaged with functional imaging
methods.