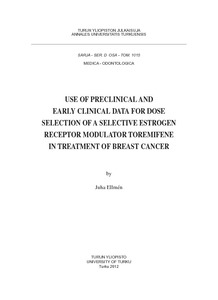 In development of human medicines, it is important to predict early and accurately enough
the disease and patient population to be treated as well as the effective and safe dose range
of the studied medicine. This is pursued by using preclinical research models, clinical
pharmacology and early clinical studies with small sample sizes. When successful, this
enables effective development of medicines and reduces unnecessary exposure of healthy
subjects and patients to ineffectice or harmfull doses of experimental compounds.

Toremifene is a selective estrogen receptor modulator (SERM) used for treatment of breast
cancer. Its development was initiated in 1980s when selection of treatment indications
and doses were based on research in cell and animal models and on noncomparative
clinical studies including small number of patients. Since the early development phase,
the treatment indication, the patient population and the dose range were confirmed in
large comparative clinical studies in patients. Based on the currently available large and
long term clinical study data the aim of this study was to investigate how the early phase
studies were able to predict the treatment indication, patient population and the dose
range of the SERM.

As a conclusion and based on the estrogen receptor mediated mechanism of action early
studies were able to predict the treatment indication, target patient population and a
dose range to be studied in confirmatory clinical studies. However, comparative clinical
studies are needed to optimize dose selection of the SERM in treatment of breast cancer.