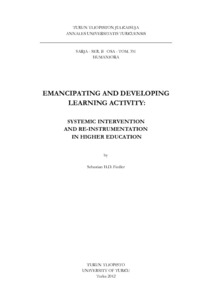 The central theme of this thesis is the emancipation and further development
of learning activity in higher education in the context of the ongoing digital
transformation of our societies. It was developed in response to the highly
problematic mainstream approach to digital re-instrumentation of teaching and
studying practises in contemporary higher education. The mainstream
approach is largely based on centralisation, standardisation, commoditisation,
and commercialisation, while re-producing the general patterns of control,
responsibility, and dependence that are characteristic for activity systems of
schooling. Whereas much of educational research and development focuses on
the optimisation and fine-tuning of schooling, the overall inquiry that is
underlying this thesis has been carried out from an explicitly critical position
and within a framework of action science. It thus conceptualises learning
activity in higher education not only as an object of inquiry but also as an
object to engage with and to intervene into from a perspective of intentional
change. The knowledge-constituting interest of this type of inquiry can be
tentatively described as a combination of heuristic-instrumental (guidelines for
contextualised action and intervention), practical-phronetic (deliberation of
value-rational aspects of means and ends), and developmental-emancipatory
(deliberation of issues of power, self-determination, and growth) aspects. Its
goal is the production of orientation knowledge for educational practise.

The thesis provides an analysis, argumentation, and normative claim on
why the development of learning activity should be turned into an object of
individual|collective inquiry and intentional change in higher education, and
why the current state of affairs in higher education actually impedes such a
development. It argues for a decisive shift of attention to the intentional
emancipation and further development of learning activity as an important
cultural instrument for human (self-)production within the digital
transformation.

The thesis also attempts an in-depth exploration of what type of
methodological rationale can actually be applied to an object of inquiry
(developing learning activity) that is at the same time conceptualised as an
object of intentional change within the ongoing digital transformation. The
result of this retrospective reflection is the formulation of “optimally
incomplete” guidelines for educational R&D practise that shares the practicalphronetic
(value related) and developmental-emancipatory (power related)
orientations that had been driving the overall inquiry.

In addition, the thesis formulates the instrumental-heuristic knowledge
claim that the conceptual instruments that were adapted and validated in the
context of a series of intervention studies provide means to effectively
intervene into existing practise in higher education to support the necessary
development of (increasingly emancipated) networked learning activity.
It suggests that digital networked instruments (tools and services) generally
should be considered and treated as transient elements within critical systemic
intervention research in higher education. It further argues for the
predominant use of loosely-coupled, digital networked instruments that allow
for individual|collective ownership, control, (co-)production, and re-use in
other contexts and for other purposes. Since the range of digital
instrumentation options is continuously expanding and currently shows no
signs of an imminent slow-down or consolidation, individual and collective
exploration and experimentation of this realm needs to be systematically
incorporated into higher education practise.