Thinking Outside the Box: Enhancing Science Teaching by Combining (Instead of Contrasting) Laboratory and Simulation Activities

Thinking Outside the Box: Enhancing Science Teaching by Combining (Instead of Contrasting) Laboratory and Simulation Activities 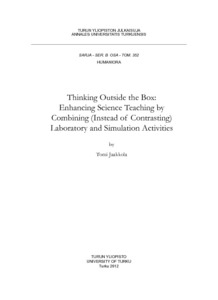 The focus of the present work was on 10- to 12-year-old elementary school students’ conceptual
learning outcomes in science in two specific inquiry-learning environments, laboratory
and simulation. The main aim was to examine if it would be more beneficial to combine
than contrast simulation and laboratory activities in science teaching. It was argued
that the status quo where laboratories and simulations are seen as alternative or competing
methods in science teaching is hardly an optimal solution to promote students’ learning and
understanding in various science domains. It was hypothesized that it would make more
sense and be more productive to combine laboratories and simulations. Several explanations
and examples were provided to back up the hypothesis.

In order to test whether learning with the combination of laboratory and simulation
activities can result in better conceptual understanding in science than learning with laboratory
or simulation activities alone, two experiments were conducted in the domain of
electricity. In these experiments students constructed and studied electrical circuits in three
different learning environments: laboratory (real circuits), simulation (virtual circuits), and
simulation-laboratory combination (real and virtual circuits were used simultaneously). In
order to measure and compare how these environments affected students’ conceptual understanding of circuits, a subject knowledge assessment questionnaire was administered
before and after the experimentation. The results of the experiments were presented in four
empirical studies. Three of the studies focused on learning outcomes between the conditions
and one on learning processes.

Study I analyzed learning outcomes from experiment I. The aim of the study was to
investigate if it would be more beneficial to combine simulation and laboratory activities
than to use them separately in teaching the concepts of simple electricity. Matched-trios
were created based on the pre-test results of 66 elementary school students and divided
randomly into a laboratory (real circuits), simulation (virtual circuits) and simulation-laboratory
combination (real and virtual circuits simultaneously) conditions. In each condition
students had 90 minutes to construct and study various circuits. The results showed that
studying electrical circuits in the simulation–laboratory combination environment improved
students’ conceptual understanding more than studying circuits in simulation and laboratory
environments alone. Although there were no statistical differences between simulation
and laboratory environments, the learning effect was more pronounced in the simulation
condition where the students made clear progress during the intervention, whereas in the
laboratory condition students’ conceptual understanding remained at an elementary level
after the intervention.

The results of the four empirical studies support the hypothesis concerning the benefits
of using simulation along with laboratory activities to promote students’ conceptual understanding of electricity. It can be concluded that when teaching students about electricity, the students can gain better understanding when they have an opportunity to use the simulation
and the real circuits in parallel than if they have only the real circuits or only a computer
simulation available, even when the use of the simulation is supported with the explicit
instruction. The outcomes of the empirical studies can be considered as the first unambiguous
evidence on the (additional) benefits of combining laboratory and simulation activities
in science education as compared to learning with laboratories and simulations alone.