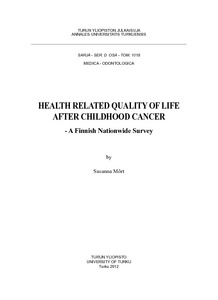 The purpose of this Finnish epidemiological nationwide cross-sectional study was to evaluate
the Health Related Quality of Life (HRQL) of young people that have survived childhood cancer
at least four years after cancer diagnosis. The study aims were (1) to increase knowledge and
understanding about the relationship between childhood cancer and its treatment and HRQL
of childhood cancer survivors and (2) to identify survivors who need and could benefit from
ongoing long-term follow-up, as well as (3) to identify what kind of aftercare the childhood
cancer survivors will possibly need.
HRQL and fatigue of currently still young survivors of extracranial childhood malignancies were
evaluated with self-reports and parent proxy reports. HRQL was measured with age-appropriate
generic instruments: PedsQL™, SF-36, 15D, 16D and 17D. Fatigue for children and adolescents
aged below 18 years was measured with the PedsQL™ Multidimensional Fatigue Scale Finnish
version. PedsQL™ parent-proxy and the PedsQL™ Multidimensional Fatigue Scale Parentproxy
instruments were used to assess the perception of the parents on HRQL and fatigue of
their children and adolescents. Postal-survey questionnaires were mailed to 852 childhood cancer
survivors aged 11-27 years and their randomly selected gender-, age and living-place matched
controls, as well as under 18-year-old children´s parents. A total of 474 survivors, 595 controls,
209 survivor’s parent and 253 control’s parent replied. The mean age of survivors at the time
of the study was 18.4 years. The mean length of survival was 12.3 years, and the mean age at
diagnosis 5.5 years.
The most of the Finnish childhood cancer survivors evaluated that their HRQL as good. Survivors
rated their HRQL equal or higher than their controls. The only dimension where the survivors
scored poorer than the controls was the 15D mobility dimension. Survivors of childhood cancer
did not suffer from significant fatigue. There were subgroups of childhood cancer survivors
who had poorer level of HRQL, and suffered from fatigue more than the reference group. The
demographic factors that associated with poorer HRQL were female gender, greater weight, living
alone, need of remedial education, an additional non-cancer diagnosis, survivors with siblings, and
self-reported unhappiness. Disease-related factors that associated with poorer HRQL were higher
age at the time of diagnosis, the diagnosis of Wilms tumor, neuroblastoma, or osteosarcoma, and
treatment with stem cell transplantation. The factors associated with more fatigue in survivors
were male gender, older age at evaluation, the need of remedial education at school, lower overall
average grade in the latest school marks report, length of survival more than 10 years, lower
HRQL-scores, and a sarcoma diagnosis. However, all the used demographic and disease related
factors explained only about one third of the variation in the HRQL scores. In open questions,
the survivors were most worried about their physical health, but were also worried about their
mental health, cancer inheritance, late-effects, and fertility and relapse issues. It seems that there
are subgroups of survivors who need and could benefit from ongoing long-term follow-up. In the
future, the survivors of childhood cancer need more information about their physical and mental
health, as well as on their cancer inheritance, possible late-effects including fertility issues, and
on the risk of relapse.