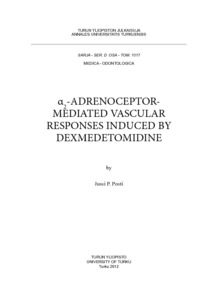 Alpha2-Adrenoceptors are cell-surface G protein coupled receptors that mediate many of the effects of the catecholamines noradrenaline and adrenaline. The three human α2-adrenoceptor subtypes are widely expressed in different tissues and organs, and they mediate many different physiological and pharmacological effects in the central and peripheral nervous system and as postsynaptic receptors in target organs. Previous studies have demonstrated that α2-adrenoceptors mediate both vascular constriction and dilatation in humans. Large inter-individual variation has been observed in the vascular responses to α2-adrenoceptor activation in clinical studies. All three receptor subtypes are potential drug targets. It was therefore considered important to further elucidate the details of adrenergic vascular regulation and its genetic variation, since such knowledge may help to improve the development of future cardiovascular drugs and intensive care therapies.

Dexmedetomidine is the most selective and potent α2-adrenoceptor agonist currently available for clinical use. When given systemically, dexmedetomidine induces nearly complete sympatholysis already at low concentrations, and postsynaptic effects, such vasoconstriction, can be observed with increasing concentrations. Thus, local infusions of small doses of dexmedetomidine into dorsal hand veins and the application of pharmacological sympathectomy with brachial plexus block provide a means to assess drug-induced peripheral vascular responses without interference from systemic pharmacological effects and autonomic nervous system regulation.