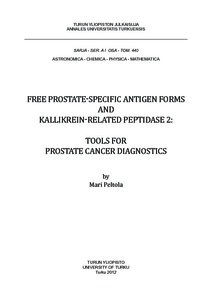 Prostate-specific antigen (PSA) is a marker that is commonly used in estimating prostate cancer risk. Prostate cancer is usually a slowly progressing disease, which might not cause any symptoms whatsoever. Nevertheless, some cases of cancer are aggressive and need to be treated before they become life-threatening. However, the blood PSA concentration may rise also in benign prostate diseases and using a single total PSA (tPSA) measurement to guide the decision on further examinations leads to many unnecessary biopsies, over-detection, and overtreatment of indolent cancers which would not require treatment. Therefore, there is a need for markers that would better separate cancer from benign disorders, and would also predict cancer aggressiveness. The aim of this study was to evaluate whether intact and nicked forms of free PSA (fPSA-I and fPSA-N) or human kallikrein-related peptidase 2 (hK2) could serve as new tools in estimating prostate cancer risk.

First, the immunoassays for fPSA-I and free and total hK2 were optimized so that they would be less prone to assay interference caused by interfering factors present in some blood samples. The optimized assays were shown to work well and were used to study the marker concentrations in the clinical sample panels.

The marker levels were measured from preoperative blood samples of prostate cancer patients scheduled for radical prostatectomy. The association of the markers with the cancer stage and grade was studied. It was found that among all tested markers and their combinations especially the ratio of fPSA-N to tPSA and ratio of free PSA (fPSA) to tPSA were associated with both cancer stage and grade. They might be useful in predicting the cancer aggressiveness, but further follow-up studies are necessary to fully evaluate the significance of the markers in this clinical setting.

The markers tPSA, fPSA, fPSA-I and hK2 were combined in a statistical model which was previously shown to be able to reduce unnecessary biopsies when applied to large screening cohorts of men with elevated tPSA. The discriminative accuracy of this model was compared to models based on established clinical predictors in reference to biopsy outcome. The kallikrein model and the calculated fPSA-N concentrations (fPSA minus fPSA-I) correlated with the prostate volume and the model, when compared to the clinical models, predicted prostate cancer in biopsy equally well. Hence, the measurement of kallikreins in a blood sample could be used to replace the volume measurement which is time-consuming, needs instrumentation and skilled personnel and is an uncomfortable procedure. Overall, the model could simplify the estimation of prostate cancer risk.

Finally, as the fPSA-N seems to be an interesting new marker, a direct immunoassay for measuring fPSA-N concentrations was developed. The analytical performance was acceptable, but the rather complicated assay protocol needs to be improved until it can be used for measuring large sample panels.