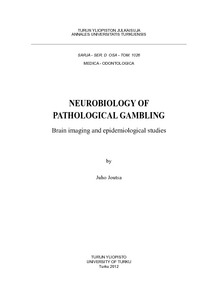 Pathological gambling, a form of behavioral addiction, refers to maladaptive, compulsive
gambling behavior severely interfering with an individual’s normal life. The prevalence
of pathological gambling has been estimated to be 1–2% in western societies. The reward
deficiency hypothesis of addiction assumes that individuals that have, or are prone, to
addictions have blunted mesolimbic dopamine reward signaling, which leads to compulsive
reward seeking in an attempt to compensate for the malfunctioning brain reward network.

In Parkinson’s disease patients with impulse control disorders, enhanced brain [18F]
fluorodopa uptake in the medial orbitofrontal cortex was observed, indicating increased
presynaptic monoamine function in this region, which is known to influence signaling in
the mesolimbic system and reward processing. Finally, a large epidemiological survey
in Finnish Parkinson’s disease patients showed that compulsive behaviors are very
common in Parkinson disease and they are strongly associated with depression.

These findings demonstrate the role of dopamine in pathological gambling, without
support for the concept of reward deficiency syndrome.