Simulation methods in the modelling of bioaffinity assays

Simulation methods in the modelling of bioaffinity assays 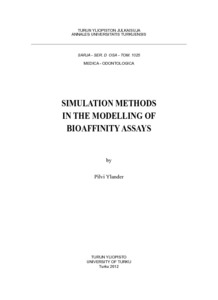 Computational model-based simulation methods were developed for the modelling of
bioaffinity assays. Bioaffinity-based methods are widely used to quantify a biological
substance in biological research, development and in routine clinical in vitro diagnostics.
Bioaffinity assays are based on the high affinity and structural specificity between the
binding biomolecules. The simulation methods developed are based on the mechanistic
assay model, which relies on the chemical reaction kinetics and describes the forming
of a bound component as a function of time from the initial binding interaction. The
simulation methods were focused on studying the behaviour and the reliability of
bioaffinity assay and the possibilities the modelling methods of binding reaction kinetics
provide, such as predicting assay results even before the binding reaction has reached
equilibrium. For example, a rapid quantitative result from a clinical bioaffinity assay
sample can be very significant, e.g. even the smallest elevation of a heart muscle marker
reveals a cardiac injury.

The simulation methods were used to identify critical error factors in rapid bioaffinity
assays. A new kinetic calibration method was developed to calibrate a measurement
system by kinetic measurement data utilizing only one standard concentration. A nodebased
method was developed to model multi-component binding reactions, which have
been a challenge to traditional numerical methods. The node-method was also used to
model protein adsorption as an example of nonspecific binding of biomolecules. These
methods have been compared with the experimental data from practice and can be
utilized in in vitro diagnostics, drug discovery and in medical imaging.