The Finnish Paper Workers' Union at a crossroads: Labor union representativeness in a changing environment, 1980-2008

The Finnish Paper Workers' Union at a crossroads: Labor union representativeness in a changing environment, 1980-2008 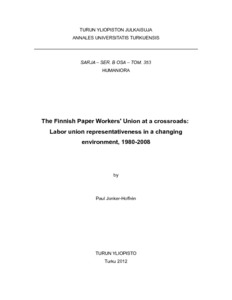 This thesis consists of four articles and an introductory section. The main research questions in all the articles refer to the changes in the representativeness of the Finnish Paper Workers' Union. Representativeness stands for the entire entity of external, internal, legal and reputational factors that enable the labor union to represent its members and achieve its goals. This concept is based on an extensive reading of quantitative and qualitative industrial relations literature, which includes works based on Marxist labor-capital relations (such as Hyman's industrial relations studies), and more recent union density studies as well as gender- and ethnic diversity-based 'union revitalization' studies. Müller-Jentsch's German studies of industrial relations have been of particular importance as well as Streeck's industrial unionism and technology studies. The concept of representativeness is an attempt to combine the insights of these diverse strands of literature and bring the scientific discussion of labor unions back to the core of a union's function: representing its members. As such, it can be seen as a theoretical innovation. The concept helps to acknowledge both the heterogeneity of the membership and the totality of a labor union organization. The concept of representativeness aims to move beyond notions of 'power'.

The first article shows in detail the industrial conflict of the Finnish paper industry in 2005. The intended focus was the issue of gender in the negotiations over a new collective agreement, but the focal point of the industrial conflict was the issue of outsourcing and how this should be organized. Also, the issue of continuous shifts as an issue of working time was very important. The drawn-out conflict can be seen as a struggle over principles, and under pressure the labor union had to concede ground on the aforementioned issues. The article concludes that in this specific conflict, the union represented its' female members to a lesser extent, because the other issues took such priority. Furthermore, because of the substantive concessions. the union lost some of its internal representativeness, and the stubbornness of the union may have even harmed the reputation of the union. This article also includes an early version of the representativeness framework, through which this conflict is analyzed.

The second article discusses wage developments, union density and collective bargaining within the context of representativeness. It is shown that the union has been able to secure substantial benefits for its members, regardless of declining employment. Collective agreements have often been based on centralized incomes policies, but the paper sector has not always joined these. Attention is furthermore paid to the changing competition of the General Assembly, with a surprisingly strong position of the Left Alliance still. In an attempt to replicate analysis of union density measures, an analysis of sectoral union density shows that similar factors as in aggregate data influence this measure, though – due to methodological issues – the results may not be robust. On this issue, it can be said that the method of analysis for aggregate union density is not suitable for sectoral union density analysis. The increasingly conflict-ridden industrial relations predicted have not actually materialized. The article concludes by asking whether the aim of ever-increasing wages is a sustainable one in the light of the pressures of globalization, though wage costs are a relatively small part of total costs.

The third article discusses the history and use of outsourcing in the Finnish paper industry. It is shown using Hyman's framework of constituencies that over time, the perspective of the union changed from 'members of the Paper Workers' Union' to a more specific view of who is a core member of the union. Within the context of the industrial unionism that the union claims to practice, this is an important change. The article shows that the union more and more caters for a core group, while auxiliary personnel is less important to the union's identity and constituencies, which means that the union's internal representativeness has decreased. Maintenance workers are an exception; the union and employers have developed a rotating system that increases the efficient allocation of these employees. The core reason of the exceptional status of maintenance personnel is their high level of non-transferable skills. In the end it is debatable whether the compromise on outsourcing solves the challenges facing the industry.

The fourth article shows diverging discourses within the union with regard to union-employer partnership for competitiveness improvements and instruments of local union representatives. In the collective agreement of 2008, the provision regulating wage effects of significant changes in the organization or content of work was thoroughly changed, though this mainly reflected decisions by the Labor Court on the pre-2008 version of the provision. This change laid bare the deep rift between the Social Democratic and Left Alliance (ex-Communist) factions of the union. The article argues that through the changed legal meaning of the provision, the union was able to transform concession bargaining into a basis for partnership. The internal discontent about this issue is nonetheless substantial and a threat to the unity of the union, both locally and at the union level.

On the basis of the results of the articles, other factors influencing representativeness, such as technology and EU law and an overview of the main changes in the Finnish paper industry, it is concluded that, especially in recent years, the Finnish Paper Workers' Union has lost some of its representativeness. In particular, the loss of the efficiency of strikes is noted, the compromise on outsourcing which may have alienated a substantial part of the union's membership, and the change in the collective agreement of 2008 have caused this decline. In the latter case, the internal disunion on that issue shows the constraints of the union's internal democracy. Furthermore, the failure of the union to join the TEAM industrial union (by democratic means), the internal conflicts and a narrow focus on its own sector may also hurt the union in the future, as the paper industry in Finland is going through a structural change. None of these changes in representativeness would have been so drastic without the considerable pressure of globalization - in particular changing markets, changing technology and a loss of domestic investments to foreign investments, which in the end have benefited the corporations more than the Finnish employees of these corporations. Taken together, the union risks becoming socially irrelevant in time, though it will remain formally very strong on the basis of its institutional setting and financial situation.