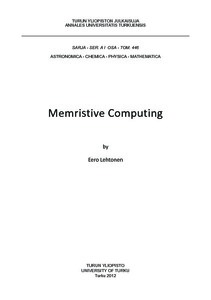 Memristive computing refers to the utilization of the memristor, the fourth
fundamental passive circuit element, in computational tasks.

The existence of the memristor was theoretically predicted in 1971 by
Leon O. Chua, but experimentally validated only in 2008 by HP Labs. A
memristor is essentially a nonvolatile nanoscale programmable resistor —
indeed, memory resistor — whose resistance, or memristance to be precise,
is changed by applying a voltage across, or current through, the device.

Memristive computing is a new area of research, and many of its fundamental
questions still remain open. For example, it is yet unclear which
applications would benefit the most from the inherent nonlinear dynamics
of memristors. In any case, these dynamics should be exploited to allow
memristors to perform computation in a natural way instead of attempting
to emulate existing technologies such as CMOS logic. Examples of such
methods of computation presented in this thesis are memristive stateful logic
operations, memristive multiplication based on the translinear principle, and
the exploitation of nonlinear dynamics to construct chaotic memristive circuits.

This thesis considers memristive computing at various levels of abstraction.
The first part of the thesis analyses the physical properties and the
current-voltage behaviour of a single device. The middle part presents memristor
programming methods, and describes microcircuits for logic and analog
operations. The final chapters discuss memristive computing in largescale
applications. In particular, cellular neural networks, and associative
memory architectures are proposed as applications that significantly benefit
from memristive implementation. The work presents several new results on
memristor modeling and programming, memristive logic, analog arithmetic
operations on memristors, and applications of memristors.

The main conclusion of this thesis is that memristive computing will
be advantageous in large-scale, highly parallel mixed-mode processing architectures.
This can be justified by the following two arguments. First,
since processing can be performed directly within memristive memory architectures,
the required circuitry, processing time, and possibly also power
consumption can be reduced compared to a conventional CMOS implementation.
Second, intrachip communication can be naturally implemented by
a memristive crossbar structure.