The Roots of Neurofibromas in Neurofibromatosis 1 — A Question of Multipotency, Differentiation and Hiding

The Roots of Neurofibromas in Neurofibromatosis 1 — A Question of Multipotency, Differentiation and Hiding 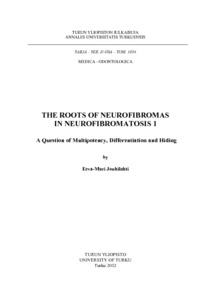 Neurofibromatosis type 1 (NF1) is an autosomal dominant cancer predisposition
syndrome that affects about 1 in 3500 individuals worldwide. NF1 is caused by
mutations in the NF1 gene that encodes the tumor suppressor protein neurofibromin, an
inactivator of the Ras oncogene. The hallmarks of NF1 include pigmentary lesions of
the skin, Lisch nodules of the iris and cutaneous neurofibromas. Cutaneous
neurofibromas are benign tumors composed of all the cell types of normal peripheral
nerve. The traditional view of neurofibroma development has been that cutaneous
neurofibromas arise from the disruption of the small nerve tributaries of the skin and
subsequent proliferation of the resident cells. The second hit mutation in the NF1 gene
has been considered as a prerequisite for neurofibroma development. The second hit is
detectable in a subpopulation of primary Schwann cells cultured from neurofibromas.

This thesis challenges the traditional concept of neurofibroma development.
The results show that cutaneous neurofibromas are intimately associated with hair
follicular structures and contain multipotent precursor cells (NFPs), suggesting that
neurofibromas may arise from the multipotent cells which reside in hair follicles.
Furthermore, this study presents that neurofibroma-derived Schwann cells that harbor
bi-allelic inactivation in the NF1 gene express HLA class II genes and may act as nonprofessional
antigen presenting cells. The CD4- and FoxP3-positive cells detected in
cutaneous neurofibromas suggest that these cells may represent regulatory T cells
(Tregs) which interact with HLA II –positive cells and aid the tumor cells in hiding
from the immune system and are thus mediators of immune tolerance.

This thesis also investigated neurofibroma development in the oral cavity and
the use of different biomarkers to characterize cellular differentiation in neurofibromas.
The results revealed that oral neurofibromas are not rare, but they usually appear as
solitary lesions contrary to multiple cutaneous neurofibromas and present high
heterogeneity within and between tumors. The use of class III beta-tubulin as a marker for
neuronal differentiation led to an unexpected finding showing that multiple cell types
express class III beta-tubulin during mitosis.

The increased understanding of the multipotency of tumor cells, cellular
differentiation and ability to hide from immune system will aid in the development of
future treatments. Specifically, targeting Tregs in NF1 patients could provide a novel
therapeutic approach to interfere with the development of neurofibromas.