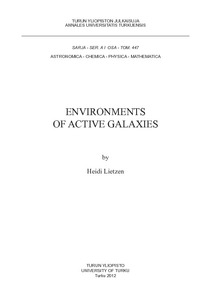 This dissertation presents studies on the environments of active galaxies.

Paper I is a case study of a cluster of galaxies containing BL Lac object RGB
1745+398. We measured the velocity dispersion, mass, and richness of the cluster. This
was one of the most thorough studies of the environments of a BL Lac object. Methods
used in the paper could be used in the future for studying other clusters as well.

In Paper II we studied the environments of nearby quasars in the Sloan Digital Sky
Survey (SDSS). We found that quasars have less neighboring galaxies than luminous
inactive galaxies. In the large-scale structure, quasars are usually located at the edges
of superclusters or even in void regions. We concluded that these low-redshift quasars
may have become active only recently because the galaxies in low-density environments
evolve later to the phase where quasar activity can be triggered.

In Paper III we extended the analysis of Paper II to other types of AGN besides
quasars. We found that different types of AGN have different large-scale environments.
Radio galaxies are more concentrated in superclusters, while quasars and Seyfert galaxies
prefer low-density environments. Different environments indicate that AGN have
different roles in galaxy evolution. Our results suggest that activity of galaxies may
depend on their environment on the large scale.