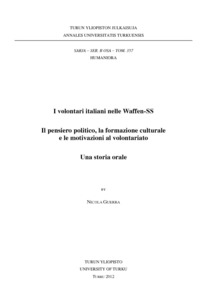 My doctoral dissertation examines the experiences of the Italian volunteers in the Waffen-SS troops using in-depth interviews with former volunteers as the main primary source. This phenomenon, even if significant in size (depending on the source, some 15 000-20 000 Italian men volunteered in the Waffen-SS), has been hitherto largely unknown to historical research. The available literature on the Italian volunteers, mainly written by military history enthusiast journalists and methodologically weak, concentrates mainly on the combat operations and military organization, and offers a rather stereotypical profile of the volunteers.

My dissertation does not aim to reconstruct the military history of the different divisions of the Waffen-SS in which Italian volunteers operated but instead to examine the subjective, private and intimate experience of the volunteers in order to understand the motivations, attitudes, beliefs and cultural and family background, as well as their political ideas. The main objective of my doctoral dissertation is to discover the ideological precepts of the volunteers’ political credo. As the last phase of fascism and its ideology, often defined as the “Germanisation” or “Nazification” of fascism, is still the object of wide academic debate, a better understanding of the volunteers’ ideology also contributes to deepening overall knowledge of the nature of this last phase.

An exhaustive portrait of the ideological structure of the volunteers has been obtained, as well as of the cultural and social origins of the values that contributed to the rise and adoption of this ideology. Further, the volunteers’ motivations to enlist have been clearly reconstructed, together with their cultural, political, social and military backgrounds. The results of the research are particularly relevant both for comprehension of the Italian phenomenon of volunteering in the Waffen-SS and for the reconstruction of the ideological dynamics of the last phase of fascism. The volunteers’ political and ideological system, which can be defined as the Italian SS-fascist ideology, disagrees strongly with the vaguely described ideological profile offered by previous studies that describe volunteers as generically “super-fascist”. The research also offers the opportunity for a deeper understanding of the final fascist ideological trajectory, currently defined, not without a certain level of approximation, as the “Germanisation” or “Nazification” of fascist ideology.