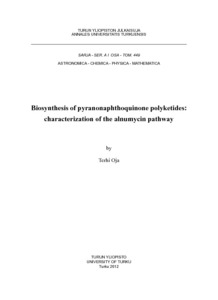 Alnumycin A is an aromatic pyranonaphthoquinone (PNQ) polyketide closely related
to the model compound actinorhodin. While some PNQ polyketides are glycosylated,
alnumycin A contains a unique sugar-like dioxane moiety. This unusual structural feature
made alnumycin A an interesting research target, since no information was available
about its biosynthesis. Thus, the main objective of the thesis work became to identify the
steps and the enzymes responsible for the biosynthesis of the dioxane moiety.
Cloning, sequencing and heterologous expression of the complete alnumycin gene cluster
from Streptomyces sp. CM020 enabled the inactivation of several alnumycin biosynthetic
genes and preliminary identification of the gene products responsible for pyran ring
formation, quinone formation and dioxane biosynthesis. The individual deletions of the
genes resulted in the production of several novel metabolites, which in many cases turned
out to be pathway intermediates and could be used for stepwise enzymatic reconstruction
of the complete dioxane biosynthetic pathway in vitro. Furthermore, the in vitro reactions
with purified alnumycin biosynthetic enzymes resulted in the production of other novel
compounds, both pathway intermediates and side products.

Identification and molecular level studies of the enzymes AlnA and AlnB catalyzing the
first step of dioxane biosynthesis – an unusual C-ribosylation step – led to a mechanistic
proposal for the C-ribosylation of the polyketide aglycone. The next step on the dioxane
biosynthetic pathway was found to be the oxidative conversion of the attached ribose
into a highly unusual dioxolane unit by Aln6 belonging to an uncharacterized protein
family, which unexpectedly occurred without any apparent cofactors. Finally, the last
step of the pathway was found to be catalyzed by the NADPH-dependent reductase
Aln4, which is able to catalyze the conversion of the formed dioxolane into a dioxane
moiety.

The work presented here and the knowledge gained of the enzymes involved in dioxane
biosynthesis enables their use in the rational design of novel compounds containing C–C
bound ribose, dioxolane and dioxane moieties.