Pregnancy and periodontium. A clinical, microbiological, and enzymological approach via a longitudinal study 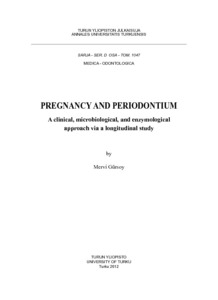 The mechanisms leading to an enhanced susceptibility to gingivitis in pregnant women have
not yet been completely described. Therefore, the current study series were performed to
investigate longitudinally the influence of pregnancy on periodontal tissues, and to evaluate
microbial and host response factors related to pregnancy gingivitis formation.

Pregnancy-related periodontal changes were analysed in 30 generally healthy women (24-
35 years old) once per trimester, till the end of lactation. Matched non-pregnant women
(n=24) served as the controls, and were examined three times, once per following month.
Pregnancy-related gingival inflammation was observed as enhanced tendency towards
gingival bleeding and pseudopocket formation with a concomitant decrease in plaque
levels. Gingivitis reached its peak during mid-pregnancy and then decreased transiently
visit by visit. After lactation, no differences in periodontal status were seen between the
study and control populations.

Matrix metalloproteinases (MMPs) are involved in periodontal destruction. However,
their role in pregnancy gingivitis is not well studied. Therefore, neutrophilic enzymes and
proteinases, such as MMP and myeloperoxidase (MPO) levels were analysed from saliva
and gingival crevicular fluid (GCF) samples during the follow-up. Despite increased
inflammation and microbial shift towards anaerobes, the host response did not activate the
MMP, elastase and MPO secretion during pregnancy.

These results demonstrate that during pregnancy gingival inflammation is enhanced
especially during the second trimester, when P. nigrescens levels in subgingival plaque were
increased, whereas the neutrophilic enzymes and proteinase levels in both saliva and GCF
remained low. These findings could explain, at least in part, why pregnancy gingivitis itself
does not predispose or proceed to periodontitis.