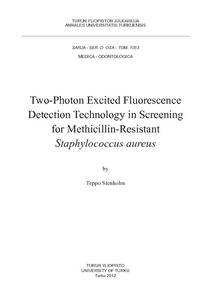 Control of the world-wide spread of methicillin-resistant Staphylococcus aureus (MRSA) has been unsuccessful in most developed countries. A few countries have been able to maintain a low MRSA prevalence, plausibly due to their strict MRSA control policies. Such policies require wide-scale screening of patients with suspected MRSA colonization, in order to nurse the MRSA-positive patients in contact isolation.

The aim of this study was to develop and introduce a 2-photon excited fluorescence detection (TPX) technique for screening of MRSA directly from clinical samples. The assay principle involves specific online immunometric monitoring of S. aureus growth under selective antibiotic pressure.

After the novel TPX approach had been set up, its applicability for the detection of MRSA was evaluated using a large MRSA collection including practically all epidemic MRSA strains identified in Finland between 1991 and 2009. The TPX assay was found both sensitive (97.9%) and specific (94.1%) in this epidemiological setting, illustrating that the method is tolerant to wide biological variation as well as to environments with rapidly emerging MRSA strains. When MRSA was screened directly from colonization samples, all patients positive for MRSA by conventional methods were positive also by the TPX assay. The assay capacity was 48 samples per a test run, and the median time required for confirmation of a true-positive screening test result was 3 h 26 min.

Collectively, the findings presented in this thesis suggest that the TPX MRSA screening assay could be applicable for direct screening of MRSA colonization samples without any prior steps of isolation. This can potentially mean that contact isolation of suspected carriers testing negative could be discontinued earlier, thereby reducing the costs and burden associated with the containment of MRSA. In case of infection, a positive test result would ensure an early onset of effective therapy.