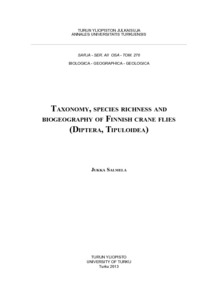 Biodiversity is unequally spread throughout terrestrial ecosystems. The highest species
richness of animals and plants is encountered around the Equator, and naturalists observe a
decrease in the number of creatures with increasing latitude. Some animal groups, however,
display an anomalous species richness pattern, but these are exceptions to the general rule.
Crane flies (Diptera, Tipuloidea) are small to large sized, non-biting nematoceran insects,
being mainly associated with moist environments. The species richness of crane flies is
highest in the tropics, but these insects are species rich and abundant in all biogeographic
realms, boreal and arctic biomes included. The phylogeny and systematics of crane flies are
still at an early stage and somewhat controversial. New species are constantly discovered
even from temperate Europe, faunistically the best known continent. Crane flies have been
rather neglected group of insects in Finland. The history of Finnish crane fly taxonomy and
faunistics started in 1907, the year when Carl Lundström published his two first articles
on tipuloids. Within roughly 100 years there have been only a handful of entomologists
studying the Finnish fauna, and the species richness and natural history of these flies have
remained poorly understood and mapped. The aim of this thesis is to clarify the taxonomy
of Finnish crane flies, present an updated and annotated list of species and seek patterns in
regional species richness and assemblage composition.

Tipula stackelbergi Alexander has been revised (I). This species was elevated to a species
rank from a subspecific rank under T. pruinosa Wiedemann and T. stackelbergi was also
deleted from the list of European crane flies. Two new synonyms were found: T. subpruinosa
Mannheims is a junior synonym of T. freyana Lackschewitz and T. usuriensis Alexander
is a junior synonym of T. pruinosa. A new species Tipula recondita Pilipenko & Salmela
has been described (II). Both morphology and COI (mtDNA) sequences were used in the
assessment of the status of the species. The new species is highly disjunct, known from
Finland and Russian Far East. A list of Finnish crane flies was presented, including the
presence of species in the Finnish biogeographical provinces (III). A total of twenty-four
species were formally reported for the first time from Finland and twenty-two previously
reported species were deleted from the list. A short historical review on the studies of
Finnish crane flies has been provided. The current list of Finnish species consists of 338
crane flies (IV, Appendix I). Species richness of all species and saproxylic/fungivorous
species is negatively correlated with latitude, but mire-dwelling species show a reversed
species richness gradient (i.e. an increase in the number of species toward north). Provincial
assemblages displayed a strong latitudinal gradient and faunistic distance increased with
increasing geographical distance apart of the provinces. Nearly half (48 %) of the Finnish
crane flies are Trans-Palaearctic, roughly one-third (34 %) are West Palaearctic and only
16 and 2 % are Holarctic and Fennoscandian, respectively. Due to the legacy of Pleistocene
glaciations, endemic Fennoscandian species are problematic and it is thus concluded that
there are probably no true endemic crane flies in this region. Finally, there are probably
species living within Finnish borders that have hitherto remained unnoticed. Based on
subjective assessment, the number of “true” (i.e. recorded + unknown species) species
count of Finnish crane flies is at minimum 350.