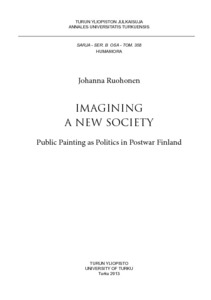 To answer these questions, extensive archival work has been performed, and over 200 public paintings have been documented around Finland. The research material has been studied in a sociological framework and in the context of the political and economic history of Finland, employing critical theories on public space and public art as well as theories on the building of nationalism, commemoration, memory, and forgetting. An important aim of this research was to open up a new field of study and position public painting within Finnish art history, from which it has been conspicuous by its absence.

The research indicates that public painting was a significant genre of art in postwar Finland. The process of creating a national genre of public painting participated in the defining of municipal and state art politics in the country, and paintings functioned as vehicles of carrying out the agenda of the commissioning bodies. In the formation of municipal art policies in Finland in the 1950s, public painting connected to the same tendency of democratising art as the founding of public art museums. Public painting commissions also functioned as an arena of competition and a means of support for the artists. Public paintings were judged and commissioned within the realm of political decision-making, and they suggested the values of the decision-making groups, generally conveyed as the values of the society. The participation of official agents in the production allocated a position of official art to the genre.