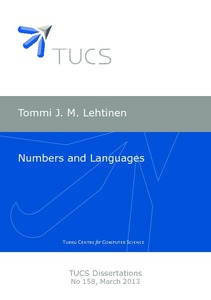 The thesis presents results obtained during the authors PhD-studies. First systems of language equations of a simple form consisting of just two equations are proved to be computationally universal. These are systems over unary alphabet, that are seen as systems of equations over natural numbers. The systems contain only an equation X+A=B and an equation X+X+C=X+X+D, where A, B, C and D are eventually periodic constants. It is proved that for every recursive set S there exists natural numbers p and d, and eventually periodic sets A, B, C and D such that a number n is in S if and only if np+d is in the unique solution of the abovementioned system of two equations, so all recursive sets can be represented in an encoded form. It is also proved that all recursive sets cannot be represented as they are, so the encoding is really needed.

Furthermore, it is proved that the family of languages generated by Boolean grammars is closed under injective gsm-mappings and inverse gsm-mappings. The arguments apply also for the families of unambiguous Boolean languages, conjunctive languages and unambiguous languages.