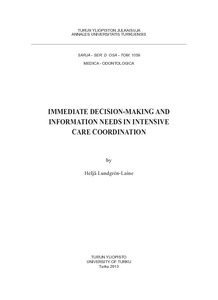 The aim of this study was to develop a theoretical model for information integration to support the deci¬sion making of intensive care charge nurses, and physicians in charge – that is, ICU shift leaders. The study focused on the ad hoc decision-making and immediate information needs of shift leaders during the management of an intensive care unit’s (ICU) daily activities. The term ‘ad hoc decision-making’ was defined as critical judgements that are needed for a specific purpose at a precise moment with the goal of ensuring instant and adequate patient care and a fluent flow of ICU activities. Data collection and research analysis methods were tested in the identification of ICU shift leaders’ ad hoc decision-making. Decision-making of ICU charge nurses (n = 12) and physicians in charge (n = 8) was observed using a think-aloud technique in two university-affiliated Finnish ICUs for adults. The ad hoc decisions of ICU shift leaders were identified using an application of protocol analysis. In the next phase, a structured online question¬naire was developed to evaluate the immediate information needs of ICU shift leaders. A national survey was conducted in all Finnish, university-affiliated hospital ICUs for adults (n = 17). The questionnaire was sent to all charge nurses (n = 515) and physicians in charge (n = 223). Altogether, 257 charge nurses (50%) and 96 physicians in charge (43%) responded to the survey. The survey was also tested internationally in 16 Greek ICUs. From Greece, 50 charge nurses out of 240 (21%) responded to the survey.

In conclusion, it was found that ICU shift leaders make hundreds of ad hoc decisions during the course of a day related to the allocation of resources and organisation of patient care. The ad hoc decision-making of ICU shift leaders is a complex multi-professional process, which requires a lot of immediate information. Real-time support for information related to patient admission, the organisation and man¬agement of work, and allocation of staff resources is especially needed. The preliminary information integration model can be applied when real-time enterprise resource planning systems are developed for intensive care daily management