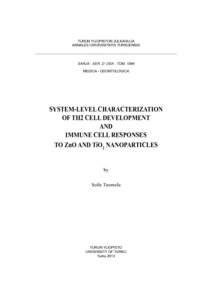 Asthma and allergy are common diseases and their prevalence is increasing. One of the hypotheses that explains this trend is exposure to inhalable chemicals such as traffi c-related air pollution. Epidemiological research supports this theory, as a correlation between environmental chemicals and allergic respiratory diseases has been found. In addition to ambient airborne particles, one may be exposed to engineered nanosized materials that are actively produced due to their favorable physico-chemical properties compared to their bulk size counterparts. On the cellular level, improper activity of T helper (Th) cells has been connected to allergic reactions. Th cells can differentiate into functionally different effector subsets, which are identifi ed according to their characteristic cytokine profi les resulting in specifi c ability to communicate with other cells. Th2 cells activate humoral immunity and stimulate eradication of extracellular pathogens. However, persistent predominance of Th2 cells is involved in a development of number of allergic diseases. The cytokine environment at the time of antigen recognition is the major factor determining the polarization of a naïve Th cell. Th2 cell differentiation is initiated by IL4, which signals via transcription factor STAT6. Although the importance of this pathway has been evaluated in the mouse studies, the signaling components involved have been largely unknown. The aim of this thesis was to identify molecules, which are under the control of IL4 and STAT6 in Th cells. This was done by using system-level analysis of STAT6 target genes at genome, mRNA and protein level resulting in identifi cation of various genes previously not connected to Th2 cell phenotype acquisition. In the study, STAT6-mediated primary and secondary target genes were dissection from each other and a detailed transcriptional kinetics of Th2 cell polarization of naïve human CD4+ T cells was collected. Integration of these data revealed the hierarchy of molecular events that mediates the differentiation towards Th2 cell phenotype. In addition, the results highlighted the importance of exploiting proteomics tools to complement the studies on STAT6 target genes identifi ed through transcriptional profi ling. In the last subproject, the effects of the exposure with ZnO and TiO2 nanoparticles was analyzed in Jurkat T cell line and in primary human monocyte-derived macrophages and dendritic cells to evaluate their toxicity and potential to cause infl ammation. Identifi cation of ZnO-derived gene expression showed that the same nanoparticles may elicit markedly distinctive responses in different cell types, thus underscoring the need for unbiased profi ling of target genes and pathways affected. The results gave additional proof that the cellular response to nanosized ZnO is due to leached Zn2+ ions. The approach used in ZnO and TiO2 nanoparticle study demonstrated the value of assessing nanoparticle responses through a toxicogenomics approach. The increased knowledge of Th2 cell signaling will hopefully reveal new therapeutic nodes and eventually improve our possibilities to prevent and tackle allergic infl ammatory diseases.