Luminescent Lanthanide Reporters: New Concepts for Use in Bioanalytical Applications 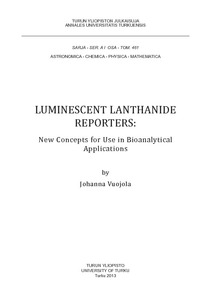 Lanthanides represent the chemical elements from lanthanum to lutetium. They intrinsically exhibit some very exciting photophysical properties, which can be further enhanced by incorporating the lanthanide ion into organic or inorganic sensitizing structures. A very popular approach is to conjugate the lanthanide ion to an organic chromophore structure forming lanthanide chelates. Another approach, which has quickly gained interest, is to incorporate the lanthanide ions into nanoparticle structures, thus attaining improved specific activity and binding capacity. The lanthanide-based reporters usually express strong luminescence emission, multiple narrow emission lines covering a wide wavelength range, and exceptionally long excited state lifetimes enabling timeresolved detection. Because of these properties, the lanthanide-based reporters have found widespread applications in various fields of life. This study focuses on the field of bioanalytical applications.

The aim of the study was to demonstrate the utility of different lanthanide-based reporters in homogeneous Förster resonance energy transfer (FRET)-based bioaffinity assays. Several different model assays were constructed. One was a competitive bioaffinity assay that utilized energy transfer from lanthanide chelate donors to fluorescent protein acceptors. In addition to the conventional FRET phenomenon, a recently discovered non-overlapping FRET (nFRET) phenomenon was demonstrated for the first time for fluorescent proteins. The lack of spectral overlap in the nFRET mechanism provides sensitivity and versatility to energy transfer-based assays. The distance and temperature dependence of these phenomena were further studied in a DNA-hybridization assay. The distance dependence of nFRET deviated from that of FRET, and unlike FRET, nFRET demonstrated clear temperature dependence. Based on these results, a possible excitation mechanism operating in nFRET was proposed. In the study, two enzyme activity assays for caspase-3 were also constructed. One of these was a fluorescence quenching-based enzyme activity assay that utilized novel inorganic particulate reporters called upconverting phosphors (UCPs) as donors. The use of UCPs enabled the construction of a simple, rather inexpensive, and easily automated assay format that had a high throughput rate. The other enzyme activity assay took advantage of another novel reporter class, the lanthanidebinding peptides (LBPs). In this assay, energy was transferred from a LBP to a green fluorescent protein (GFP). Using the LBPs it was possible to avoid the rather laborious, often poorly repeatable, and randomly positioned chemical labeling. In most of the constructed assays, time-resolved detection was used to eliminate the interfering background signal caused by autofluorescence. The improved signal-to-background ratios resulted in increased assay sensitivity, often unobtainable in homogeneous assay formats using conventional organic fluorophores. The anti-Stokes luminescence of the UCPs, however, enabled the elimination of autofluorescence even without time-gating, thus simplifying the instrument setup. Together, the studied reporters and assay formats pave the way for increasingly sensitive, simple, and easily automated bioanalytical applications.