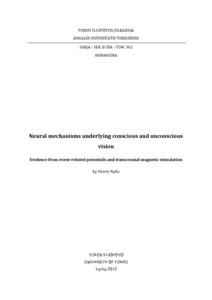 Vision affords us with the ability to consciously see, and use this information in our behavior. While research has produced a detailed account of the function of the visual system, the neural processes that underlie conscious vision are still debated. One of the aims of the present thesis was to examine the time-course of the neuroelectrical processes that correlate with conscious vision. The second aim was to study the neural basis of unconscious vision, that is, situations where a stimulus that is not consciously perceived nevertheless influences behavior.

Studies I-III compared models of conscious vision by studying event-related potentials (ERP). ERPs represent the brain’s average electrical response to stimulation. The results support the model that associates conscious vision with activity localized in the ventral visual cortex. The timing of this activity corresponds to an intermediate stage in visual processing. Earlier stages of visual processing may influence what becomes conscious, although these processes do not directly enable visual consciousness. Late processing stages, when more widespread cortical areas are activated, reflect the access to and manipulation of contents of consciousness.

Studies IV and V concentrated on unconscious vision. By using transcranial magnetic stimulation (TMS) we show that when early visual cortical processing is disturbed so that subjects fail to consciously perceive visual stimuli, they may nevertheless guess (above chance-level) the location where the visual stimuli were presented. However, the results also suggest that in a similar situation, early visual cortex is necessary for both conscious and unconscious perception of chromatic information (i.e. color). Chromatic information that remains unconscious may influence behavioral responses when activity in visual cortex is not disturbed by TMS. Our results support the view that early stimulus-driven (feedforward) activation may be sufficient for unconscious processing.

In conclusion, the results of this thesis support the view that conscious vision is enabled by a series of processing stages. The processes that most closely correlate with conscious vision take place in the ventral visual cortex ~200 ms after stimulus presentation, although preceding time-periods and contributions from other cortical areas such as the parietal cortex are also indispensable. Unconscious vision relies on intact early visual activation, although the location of visual stimulus may be unconsciously resolved even when activity in the early visual cortex is interfered with.