The Effects of Anesthetic Induced Loss of Consciousness on Quantitative Electroen Cephalogram, and Bispectral and Spectral Entropy Indices. Studies on Healthy Male 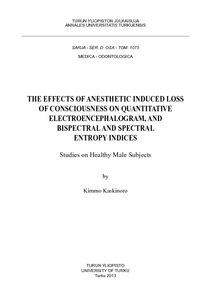 Changes in the electroencephalography (EEG) signal have been used to study the effects of anesthetic agents on the brain function. Several commercial EEG based anesthesia depth monitors have been developed to measure the level of the hypnotic component of anesthesia. Specific anesthetic related changes can be seen in the EEG, but still it remains difficult to determine whether the subject is consciousness or not during anesthesia. EEG reactivity to external stimuli may be seen in unconsciousness subjects, in anesthesia or even in coma. Changes in regional cerebral blood flow, which can be measured with positron emission tomography (PET), can be used as a surrogate for changes in neuronal activity.

The aim of this study was to investigate the effects of dexmedetomidine, propofol, sevoflurane and xenon on the EEG and the behavior of two commercial anesthesia depth monitors, Bispectral Index (BIS) and Entropy. Slowly escalating drug concentrations were used with dexmedetomidine, propofol and sevoflurane. EEG reactivity at clinically determined similar level of consciousness was studied and the performance of BIS and Entropy in differentiating consciousness form unconsciousness was evaluated. Changes in brain activity during emergence from dexmedetomidine and propofol induced unconsciousness were studied using PET imaging. Additionally, the effects of normobaric hyperoxia, induced during denitrogenation prior to xenon anesthesia induction, on the EEG were studied.

Dexmedetomidine and propofol caused increases in the low frequency, high amplitude (delta 0.5-4 Hz and theta 4.1-8 Hz) EEG activity during stepwise increased drug concentrations from the awake state to unconsciousness. With sevoflurane, an increase in delta activity was also seen, and an increase in alpha- slow beta (8.1-15 Hz) band power was seen in both propofol and sevoflurane. EEG reactivity to a verbal command in the unconsciousness state was best retained with propofol, and almost disappeared with sevoflurane. The ability of BIS and Entropy to differentiate consciousness from unconsciousness was poor. At the emergence from dexmedetomidine and propofol induced unconsciousness, activation was detected in deep brain structures, but not within the cortex. In xenon anesthesia, EEG band powers increased in delta, theta and alpha (8-12Hz) frequencies. In steady state xenon anesthesia, BIS and Entropy indices were low and these monitors seemed to work well in xenon anesthesia. Normobaric hyperoxia alone did not cause changes in the EEG. All of these results are based on studies in healthy volunteers and their application to clinical practice should be considered carefully.