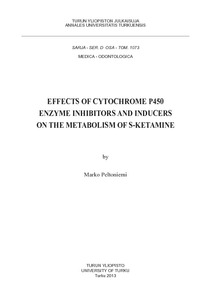 The human body eliminates foreign compounds primarily by metabolizing them to hydrophilic forms to facilitate effective excretion through the kidneys. Cytochrome P450 (CYP) enzymes in the liver and intestine contribute to the metabolism of many drugs. Pharmacokinetic drugdrug interactions occur if the activity of CYPs are inhibited or induced by another drug. Prescribing multiple drugs to the improve effectiveness of therapy or to treat coexisting diseases is a common practice in clinical medicine. Polypharmacy predisposes patients to adverse effects because of the profound unpredictability in CYP enzymatic-mediated drug metabolism.

S-ketamine is a phencyclidine derivative which functions as an antagonist of the N-methyl-Daspartate (NMDA) receptor in the central nervous system. It is a unique anaesthetic producing “dissociative anaesthesia” in high doses and analgesia in low doses. Studies with human liver microsomes suggest that ketamine is metabolized primarily via CYP3A4 and CYP2B6 enzymes. In this thesis, in healthy volunteers, randomized and controlled cross-over studies were conducted to investigate the effects of different CYP inducers and inhibitors on the pharmacokinetics and pharmacodynamics of oral and intravenous S-ketamine. The plasma concentrations of ketamine and its metabolite, norketamine, were determined at different timepoints over a 24 hour period. Other pharmacodynamic variables were examined for 12 hours.

Results of these studies showed that the inhibition of the CYP3A4 pathway by clarithromycin or grapefruit juice increased the exposure to oral S-ketamine by 2.6- and 3.0-fold. Unexpectedly, CYP3A4 inhibition by itraconazole caused no significant alterations in the plasma concentrations of oral S-ketamine. CYP3A4 induction by St. John´s wort or rifampicin decreased profoundly the concentrations of oral S-ketamine. However, after rifampicin, there were no significant differences in the plasma concentrations of S-ketamine when it was administered intravenously. This demonstrated that rifampicin inhibited the metabolism of Sketamine at the intestinal level. When CYP2B6 was inhibited by ticlopidine, there was a 2.4- fold increase in the exposure of S-ketamine. These studies demonstrated that low dose oral Sketamine is metabolized both via CYP3A4 and CYP2B6 pathways. The concomitant use of drugs that affect CYP3A4 or CYP2B6, during oral S-ketamine treatment, may cause clinically significant drug-drug interactions.