Individual dietary counselling during and after pregnancy: Impact on diet and body weight

Individual dietary counselling during and after pregnancy: Impact on diet and body weight 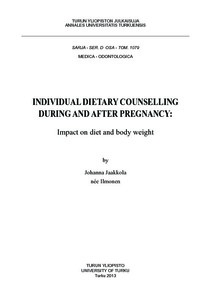 In Finland, maternity and child health clinics play a key role in promoting health in
young families. Currently, obesity causes the greatest challenges to clinics. In obese
pregnant women, an increased risk for metabolic diseases exist which can affect both
the mother and child. The purpose of this thesis was to explore the role of dietary
counselling: in Finnish health clinics; in the regulation of dietary intake; and in affecting
the body weight of women.

Other factors, such as eating behaviour, associated with dietary intake and body weight
control after pregnancy. Specifically, dietary recommendations are reached amongst
women whom had high cognitive restraint in their eating behaviour and did not
demonstrate uncontrolled eating. Overweight women more frequently emotionally ate
compared to normal weight women and women with central adiposity related more
frequently to having an uncontrolled eating behaviour than women with normal waist
circumference. In addition, being overweight prior to pregnancy and excessive weight
gain during pregnancy associated with increased body weight retention after pregnancy.

This study showed that individual dietary counselling is useful in influencing dietary
intake which adheres to dietary recommendations and this counselling influences,
favourably, body weight after pregnancy. Especially, women with the risk for weight
retention, such as women who have emotional and uncontrolled eating behaviours, who
were overweight prior to pregnancy or those who had excessive weight gain during
pregnancy, may benefit from individual dietary counselling. This study underscores the
need to develop dietary counselling practices for pregnant women and their follow-up
after pregnancy in Finnish health clinics. These practices include increasing the efficacy
of the counselling such as collaboration with families, having knowledgable health
professionals and having sufficient resources.