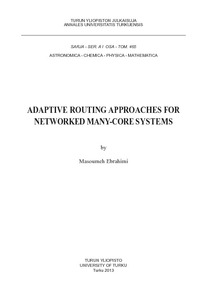 Through advances in technology, System-on-Chip design is moving towards integrating tens to hundreds of intellectual property blocks into a single chip. In such a many-core system, on-chip communication becomes a performance bottleneck for high performance designs. Network-on-Chip (NoC) has emerged as a viable solution for the communication challenges in highly complex chips. The NoC architecture paradigm, based on a modular packet-switched mechanism, can address many of the on-chip communication challenges such as wiring complexity, communication latency, and bandwidth. Furthermore, the combined benefits of 3D IC and NoC schemes provide the possibility of designing a high performance system in a limited chip area. The major advantages of 3D NoCs are the considerable reductions in average latency and power consumption.

There are several factors degrading the performance of NoCs. In this thesis, we investigate three main performance-limiting factors: network congestion, faults, and the lack of efficient multicast support. We address these issues by the means of routing algorithms.

Congestion of data packets may lead to increased network latency and power consumption. Thus, we propose three different approaches for alleviating such congestion in the network. The first approach is based on measuring the congestion information in different regions of the network, distributing the information over the network, and utilizing this information when making a routing decision. The second approach employs a learning method to dynamically find the less congested routes according to the underlying traffic. The third approach is based on a fuzzy-logic technique to perform better routing decisions when traffic information of different routes is available.

Faults affect performance significantly, as then packets should take longer paths in order to be routed around the faults, which in turn increases congestion around the faulty regions. We propose four methods to tolerate faults at the link and switch level by using only the shortest paths as long as such path exists. The unique characteristic among these methods is the toleration of faults while also maintaining the performance of NoCs. To the best of our knowledge, these algorithms are the first approaches to bypassing faults prior to reaching them while avoiding unnecessary misrouting of packets.