Studies of Solar Activity with Emphasis on Quasi-Periodic Oscillations 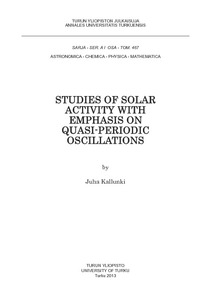 In this thesis mainly long quasi-periodic solar oscillations in various solar atmospheric structures are discussed, based on data obtained at several wavelengths, focussing, however, mainly on radio frequencies. Sunspot (Articles II and III) and quiet Sun area (QSA) (Article I) oscillations are investigated along with quasi-periodic pulsations (QPP) in a flaring event with wide-range radio spectra (Article IV). Various oscillation periods are detected; 3–15, 35–70 and 90 minutes (QSA), 10-60 and 80-130 minutes (in sunspots at various radio frequencies), 3-5, 10-23, 220-240, 340 and 470 minutes (in sunspots at photosphere) and 8-12 and 15-17 seconds (in a solar flare at radio frequencies). Some of the oscillation periods are detected for the first time, while some of them have been confirmed earlier by other research groups. Solar oscillations can provide more information on the nature of various solar structures.

This thesis presents the physical mechanisms of some solar structure oscillations. Two different theoretical approaches are chosen; magnetohydrodynamics (MHD) and the shallow sunspot model. These two theories can explain a wide range of solar oscillations from a few seconds up to some hours. Various wave modes in loop structures cause solar oscillations (<45 minutes) both in sunspots and quiet Sun areas. Periods lasting more than 45 minutes in the sunspots (and a fraction of the shorter periods) are related to sunspot oscillations as a whole. Sometimes similar oscillation periods are detected both in sunspot area variations and respectively in magnetic field strength changes. This result supports a concept that these oscillations are related to sunspot oscillations as a whole. In addition, a theory behind QPPs at radio frequencies in solar flares is presented.

The thesis also covers solar instrumentation and data sources. Additionally, the data processing methods are presented. As the majority of the investigations in this thesis focus on radio frequencies, also the most typical radio emission mechanisms are presented. The main structures of the Sun, which are related to solar oscillations, are also presented. Two separate projects are included in this thesis. Solar cyclicity is studied using the extensively large solar radio map archieve from Metsähovi Radio Observatory (MRO) at 37 GHz, between 1978 and 2011 (Article V) covering two full solar cycles. Also, some new solar instrumentation (Article VI) was developed during this thesis.