Lithostratigraphy and age of pre-Late Weichselian sediments in the Suupohja area, western Finland 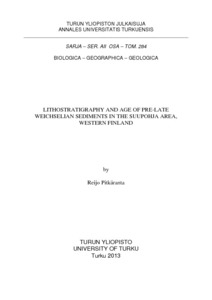 Different types of laterally extensive sand- and gravel-dominated deposits, up to several
tens of metres thick, were investigated in the Suupohja area of western Finland. The
studied sediments were deposited in glacial, ice-marginal, glaciofluvial, sea or lake, littoral
and terrestrial environments during several glacial-non-glacial cycles. Seventeen pre-Late
Weichselian and three Late Weichselian/Holocene sedimentary units were identified.
These were divided into ten formally and two informally defined formations that were
together termed the Suupohja Group. Every unit are nevertheless not detectable throughout
the study area. The informally defined “Karhukangas lower deposits” represent the lowest
units in the Suupohja Group. The Karhukangas lower deposits with 5 till units, 3
glaciolacustrine/-marine units and 2 sand units, were interpreted as having been deposited
during possibly four glacial-non-glacial cycles before the Late Pleistocene Subepoch (MIS
6 or earlier). The Kankalo Sand above the Karhukangas lower deposits comprises
glaciofluvial and aeolian sands of Late Saalian, Eemian or Early Weichselian origin (MIS
6–MIS 5c). The Kariluoma Till above the Kankalo Sand was possibly deposited during the
Late Saalian glacial advance, although an Early Weichselian origin is also possible. The
Harrinkangas Formation, with glaciofluvial and quiet-water sediments, is interpreted as
having been deposited during the Late Saalian and Eemian Stages (MIS 6–MIS 5e). The
uppermost units in the deposits studied, the Kodesjärvi Formation (shore deposit), Isojoki
Sand (aeolian), Rävåsen Formation (glaciofluvial), Vanhakylä Formation (shore line
deposit), Dagsmark Till and Kauhajoki Till, were deposited during the Weichselian Stage
(MIS 5d–MIS 2). In addition, Early Holocene (MIS 1) eskers without till cover were
informally termed the “Holocene esker deposits”. The Lumikangas Formation represents
gravelly shore deposits formed in the Holocene Epoch, when these areas last emerged from
the sea. The first Weichselian ice expansion possibly reached the western part of Suupohja
in the Early Weichselian Substage (MIS 5d?), but it did not expand further to the east. The
second Weichselian glaciation of relatively short duration occupied the southern part of
Finland in the later part of Middle Weichselian (MIS 3). Thus, the southern half of the
country remained ice-free for the majority (~65–75%) of the Weichselian Stage. Instead,
both humid temperate and periglacial conditions alternated. In the initial part of Middle
Weichselian, this area was partly submerged, which indicates eastward expansion of the
Scandinavian ice sheet(s), depressing the lithosphere. The exceptionally thick sediment
cover, multiple lithofacies, relict landscape and preserved preglacially weathered bedrock
are evidence of weak glacial erosion in the Suupohja area during the latest as well as
earlier glaciations, making this area one of the key areas in Quaternary research.