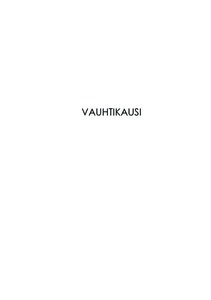 The Age of Speed:Automobility’s Gender in the 1920s Finland

The aim of this study is to analyze the connections between automobility and gender in Finland in the 1920s. In this study it is argued that the 1920s was the significant era in the Finnish history of automobility when many of the long-lasting gendered notions and cultural understandings were constructed.

This study combines cultural history of technology with gender analysis. As the previous research on gender and technology has recognized, technology is a significant site of gender negotiations. Both from the cultural historical perspective and a gender perspective it is important to understand both technology and gender as cultural constructions. They were linked together and constructed each other. In other words: technology shapes gender and gender shapes technology. Historians of technology like Nina Lerman, Ruth Oldenziel and Arwen Mohun have argued that both gender and technology are about power: social, cultural, economic and political. In this study automobility means technology that can be analyzed in layers of identity, structures, institutions and representations. The source material consists of various types of historical sources, magazines and journals, advertisements, archival material together with films and literature.

In the previous studies of the history of automobility gender has often been neglected. The term “gender” has also quite often been misunderstood. Some studies in the field have only focused on the early female drivers. However, far too little attention has been paid to the question, why automobility was considered as masculine sphere only. This study aims to give new insights to the previous interpretations of the history of automobility.

As in various other countries also in Finland, the decade of the 1920s is characterized as a period of “modern times.” It was also the era of the automobiles. Although the number of cars in Finland was still low compared to the other European countries and the USA, in press, films and literature, images of automobiles and new women – and men – on the wheel became as an emblem of a new era.

The thesis consists of three main chapters. The first main chapter focuses on the conflicts between drivers and non-drivers. The study shows how in the debate of the automobility “a driver” was constantly referred as a man and “a pedestrian” accordingly a woman, even though in the reality there were as much men and women walking on the streets and the roads. Thus, the public debate constructed and reconstructed the gendered traffic system where men were playing the key role.

The second main chapter of the study analyses the automobile clubs and the cultural representations. The chapter answers the question how the concept of a driver was gendered. The Automobile clubs and the organizations of professional drivers were in a significant role in developing the early history of traffic in Finland. The Finnish Automobile Club (Suomen Automobiili Klubi, founded in 1919) was the oldest and the most powerful of all automobile organizations. The Finnish Automobile Club accepted women as members from the very beginning. The membership was strictly limited to the upper class and the very first female members were wives and daughters of the male members. However, Doctor of medicine and surgery 316

Karolina Eskelin (1867-1936) the founding member of the Club was an exception to that convention. The male members of the Finnish Automobile Club attended official international meetings and consulted Finnish authorities in traffic and road questions, whereas, female members joined car trips, picnics and social gatherings arranged by the club. Few young female members of the club drove in races and gross-country-tours.

The cultural representations of drivers in the Finnish media in the 1920s both deconstructed and reconstructed the concept of gender. In Finnish press in general, motoring was seen as male dominated area. Men were represented as the experts of the automobility. The drivers’ uniforms and the automobile clubs underlined professionalism and expertise which, thus, got masculine meaning. Women were beautiful accessories in the car ads, but they were also becoming a new consumer group in the market. The representations of the female and the male drivers influenced and shaped actively the understandings of femininity and masculinity.